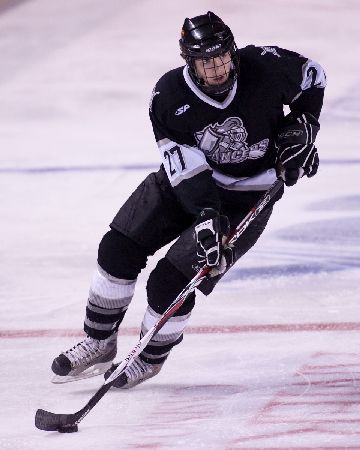 One of the best forwards to come through the USHL in recent memory is 18 year old Omaha Lancer, Seth Ambroz.

Seth's offensive ability is the strong suit of his game. Known for his accuracy both in passing and shooting the puck, he blends those skills with a finessed touch around the net. Elsewhere in the offensive zone, his powerful and accurate shot is lethal from the high slot.

Ambroz adheres to the Gretzkyan philosophy, Don't think about where the puck is, but think where it's going to be. This creativity, especially on Omaha's strong power play make Ambroz a key special team player for the Lancers.

Seth recently finished up his career as a Lancer and will be moving to the University of Minnesota in the fall.
Ambroz has been compiling a blog on NHL.com, he recently posted the following:

I know it's possible a general manager or scout may ask me why they should draft me during the interviewing stage of the Combine. If they ask, I'm going to tell them that I'm a power forward who is willing to do all the little things and willing to go to the tough spot to get any type of job done. I'm willing to step up to any challenges and I feel I'd be able to do it. I'm a hard worker and I keep a positive frame of mind on and off the ice.

He is a player who has great hands for his size and an even more impressive shot. He can put the puck away in traffic or on the break. Ambroz is also an efficient passer, tallying more assists than goals in both full seasons with the Lancers. He is a hardworking kid with great size and skills that will be able to make an instant and profound impact for the Gophers next season.

Ambroz is a big kid with some terrific offensive ability. During his time with the Omaha Lancers, he added a degree of discipline to his game. As his maturation continues, his ability to blend his superb offensive skill set with his ice sense would have the potential to make him a go-to guy for the Blue Jackets.