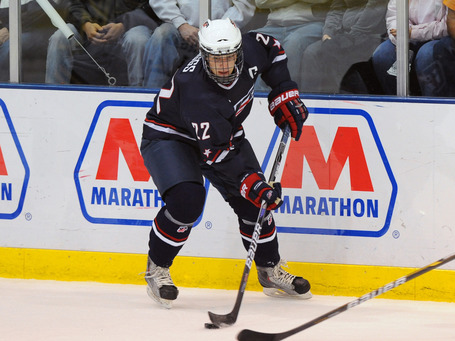 The son of former Cincinnati Cyclones fan favorite Don Biggs, Tyler is another case of Ohio hockey roots bearing fruit, and he's preparing to follow a stint in the US NTDP with an NCAA career at Miami University. With a body built to play a heavy physical game, he backs it up with a willingness to stand up for his teammates and himself on the ice. He's been playing a power forward game in the USHL, and could easily develop into an aggressive two way player and agitator at the NHL level.

Biggs certainly merits consideration as a prospect due to his size, physical play, skating ability and determination. It's difficult though to see him as a first rounder since he does not possess the offensive skills that would be worthy of such a high pick. Biggs may only top out as a 15-20 goal guy who can provide some grit and nastiness which fits nicely on some clubs but the ceiling doesn't seem high enough to justify anything other than the second round.

"He's an honest, hard-working player," an NHL scout says. "He has a big-time release, getting his shot off in traffic, which you have to count as a skill. He works really well along the boards and in the corners - same thing, if getting 50-50 pucks 70 percent of the time is a skill, then he's skilled. Does he have a great stick in terms of flashy moves in the open ice or anything like that? No. Does he use it effectively in less obvious ways? Yeah. He's an honest player. If there's been off games, it's not that he hasn't given it the effort. If it hasn't happened for him all game, he's still trying to make it happen right down to the last shift."

It doesn't hurt that this would be another player with an Ohio background and major ties into the state, but there's more to it than that.

Somewhere between Derek Dorsett and R. J. Umberger in skills and play style, Biggs could easily be a target for Scott Howson in the second round, replacing some of the grit lost from the prospect pipeline with the trades of Tom Sestito and Stefan Legein. Though it remains to be seen if he can become a consistent scoring threat at higher levels of play, his playing style is one that suits the blue collar, puck pursuit, aggressive mentality Scott Howson hopes to foster in Columbus, and his willingness to agitate and get under an opponent's skin is a bonus.

Should he add a bit more height and muscle to his frame while he develops in Oxford, we could easily be talking about a guy who can punch through defenses, win puck battles, and crash the net with aplomb. I'm also quite impressed by his skating - for all the talk that he may have a "low" ceiling, he seems like he can really make things happen on the ice. The more I look at him, I don't think Columbus should sleep on Tyler Biggs.