Should He Stay or Should He Go: Ben Guite

Share All sharing options for: Should He Stay or Should He Go: Ben Guite 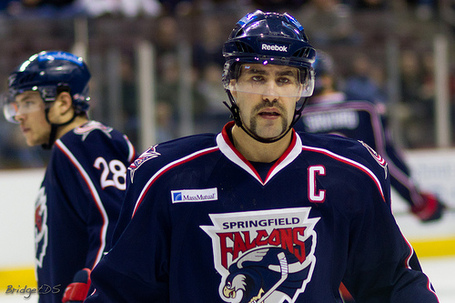 In the stats table above, Guite's 2008-09 numbers are from his time as a member of the Colorado Avalanche. 2009-10, he skated for the Milwaukee Admirals of the AHL. 2010-2011 was as the captain of the Springfield Falcons.

Second only to Tomas Kubalik in points, Ben Guite had a good season for the Falcons. A gritty centerman, Guite was signed as a free agent last summer by the Blue Jackets to add leadership for the young Falcon lineup. In a season marred with player movement, Guite remained the face of the franchise through the ups and downs of the season.

One of only five Falcons to finish the season in the black as far as +/- goes, Guite proved himself time and again as a leader both on and off the ice. In a recent conversation, when Guite's name was mentioned, members of the Falcons front office positively beamed and were very hopeful of his return for a second season in Springfield.

The American Hockey League, as the primary development league for the NHL, gets young skaters ready for the big time. Ben Guite will be 33 years old when the 2011-2012 season gets underway. Guite is not the future of the Columbus Blue Jackets.

What Guite is however, is a leader. He brings to the rink over 400 games of professional experience. He knows how to play the game of hockey, but more importantly he has the ability to impart his experience to the eager young men who indeed are the future of the Jackets.

Simply put, my perception of Ben Guite is a Chris Drury type player. Respected by his peers, liked by the fans and revered by the front office, Guite has earned a second season in Springfield.

What Should The CBJ Offer?

Keeping a budget in mind, the Jackets won't overspend on "minor league" talent. That isn't to say that they shouldn't spend more than their original intent though to keeping a quality person in the organization.

Based on his last two contracts, the Jackets could offer Guite another one year, two way deal. Keeping his NHL salary (and the cap hit) at 575K is prudent. Upping his AHL salary from 75K to 100K seems reasonable.

The Jackets should also keep in mind that Guite may be nearing the time when he's ready for a move into coaching or management. Cultivating such a relationship could be a big plus both for Ben and the Jackets in future years.