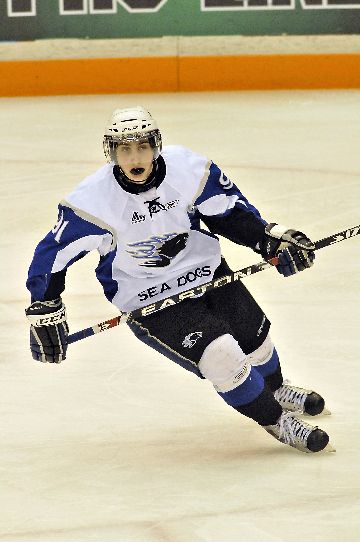 Wrapping up his second season with the Saint John Sea Dogs, Tomas Jurco and his talented teammates punctuated their QMJHL championship by winning the Memorial Cup this past Sunday night. Jurco's contribution throughout the playoffs and tournament was to average a point a game, improving slightly on his regular season numbers.

Jurco's size, despite the fact that he's only 18, is pivotal to his success on the ice. Along with his long reach, he is able to generate great speed coming down the wing. Once he's within striking distance of the net, he is able to cut sharply and find the back of the net authoritatively.


"He's a very good skater with size and excellent puck skills. He has all the tools of a first-round draft pick."

"He does different things at practice some guys would view it as being cocky, but Tomas does it because he wants to score a goal doing it. I just tell him to do what he feels comfortable doing. We're not here to show up anybody, but if that's the move you think you could score a goal with, do it. He's done pretty well in shootouts … he has stick handling and eye coordination to make those great plays. He's a big-bodied guy with a great skill level and competes really hard."

Although the Blue Jackets will most likely have drafted before Jurco's name comes up, if Scott Howson can put some kind of a deal together, Jurco could become a Nationwide mainstay. His combination of speed and agility, coupled with outstanding puck handling skills would give the Jackets the speedy power forward they have been lacking. Mix in some maturity, allowing his natural skills to further develop and you have the recipe for a genuine NHL scoring machine.