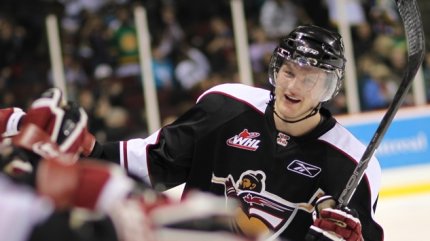 David is the son of former NHL veteran, Frantisek "Frank"  Musil. Along with his uncle, Bobby Holik, David's genetics are all hockey, through and through. He points to his dad as a major career influence. Knowing his dad has been through it (an impressive 14 seasons, with 797 NHL games to his credit) has really helped the development of the younger Musil, both on and off the ice.

Currently, Musil's physicality is his strong suit. With the aid of his large frame, he is not shy about taking the body. Somewhat of concern are the battles that he sometimes loses along the boards. Given his size, he could probably add 10-15 pounds of muscle which will help him enhance his defensive skills once he turns pro.

Having taken a tumble in the second half of the Central Scouting rankings, Musil finished at #38, compared with #26 at the mid term. His Vancouver Giants struggled through a 2-12 month of March, which probably didn't help any of the Giants rankings.

After a very solid initial campaign as a 16 year-old last season, some unfair expectations were placed on Musil this year. Going into the season, Musil was looked upon as a potential lotto pick although it didn’t look like he had the offense to support such a pick. Musil plays in all situations for the Giants and he is able to chip in a little offense but won’t likely be expected to provide that offense at the NHL level. With his dad and uncle combining to play well over 2000 NHL games and his mom being a former pro tennis player, David has some good athletic genes. Like his dad, Musil is a steady defender having very good size and strength, while being good at taking care of his own end. While Musil may be one of the best defensive defensemen available in the draft this year, he needs to work on improving his quickness. His slow acceleration and top end speed make him vulnerable during puck retrieval plays, as well as his ability to contain the fastest players in the league.

A physically imposing defender, Musil needs to develop more before he could be a serious addition to the Jackets lineup. His style, by his admission, is that of a Chris Pronger type. Of the current Jackets, Musil would be comparable to a Marc Methot type. Strong on playing the body, and while possessing the ability to move the puck, that's not necessarily his strength.