Share All sharing options for: 2011 SBNation NHL Mock Draft: With The 8th Pick, The Cannon Takes...

As you all know, this business of trying to second guess the professionals is a pretty hit or miss process, especially for a team whose general manager seems far more likely to trade the pick than go up to the podium, but what the hell.

With the 8th overall pick in the 2011 SBNation NHL Mock Draft, The Cannon is proud to select Sven Bartschi of the Portland Winterhawks. 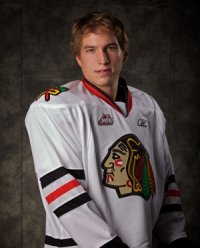 (Photo courtesy of the WHL)

With Scott Howson finally building depth back at the center position through Ryan Johansen, Michael Chaput, and particularly if the speculated deal for Jeff Carter goes through, rebuilding scoring talent on the wings will be his next challenge - particularly if Jakub Voracek or Nikita Filatov moves as part of a package. By bringing in Bartschi, we give the Jackets a talented scorer who is willing to drive to the net, playing a much "bigger" game than his 5'10 180lb. frame. With experience playing with Ryan Johansen this year, the Jackets have had plenty of time to get a good look at the Swiss winger, and we suspect they like what they've seen. He's got a fantastic gift for "finishing", quick hands, and one hell of a shot. Most importantly, you can't teach scoring instincts, and that's one thing Sven has in spades.

Take a look at our prospect profile on Bartschi to get the skinny on his stats for the past year, and check out this great highlight video.