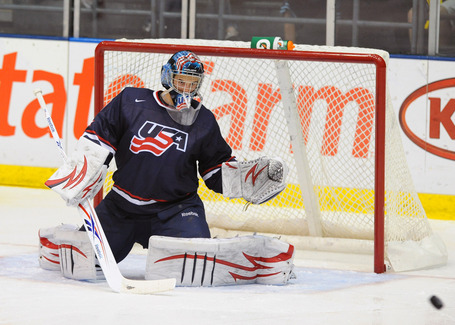 The first overall ranked North American goaltender according to NHL central scouting, John Gibson is another product of the USNDTP, and has committed to play at the University of Michigan starting next fall. After a bit of a rough start in the USHL he delivered some impressive numbers this season, including a 2.34 GAA and .926 SV% in 6 games at the World U-18 Championships, where Team USA took gold, and appears poised to make the next step. With his impressive size, Gibson plays big in the net and tends to be a very calm goalie, getting into position and moving quickly and smoothly to make stops. Much like his former teammate, Jack Campbell, Gibson could easily be the first goaltender taken in this year's NHL draft.

"John has great net coverage and size (6-foot-3, 200 pounds), and is very strong," NHL Central Scouting goalie guru Al Jensen told NHL.com. "He's sound technically, moves very well laterally and is controlled. He's calm, not busy...Campbell is the more the quick, athletic type and Gibson is the more a controlled, strong positional type. Both do have good size -- I like how strong Gibson is."

Much like Jordan Binnington, Gibson would be insurance, of a sort, helping to add another blue chip goal prospect in the pipeline. Even better, much like Allen York, Gibson could be allowed to develop in the NCAA (and though you won't see anyone in Columbus cheering for Michigan any time soon, you have to admit they're a fantastic program for developing hockey talent), letting him take a few years to build on an already solid foundation before taking a step into pro hockey.