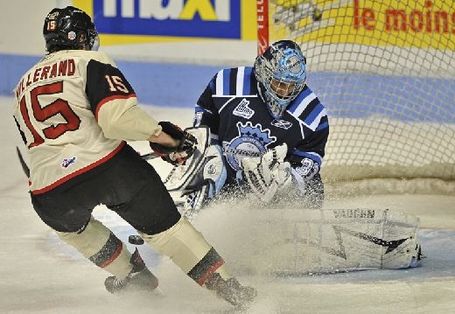 Christopher Gibson has given a lot of thought to a pro career. Regarded by most sources as one of the top two goaltending prospects available in this year's draft, Gibson left his native Finland to play Midget in Saskatchewan so that he might learn the North American style of play prior to being eligible for the CHL Import Draft.

Looked at by some as the best goalie in the CHL this season, Gibson was the difference for his Chicoutimi team. While his club was not among the league's elite, it gave Gibson the opportunity to see a lot of rubber.

Gibson's focus on the game appears to be one of his stronger attributes. Razor sharp for all 60 minutes, he is not easily rattled by the occasional contact or surrendering a soft goal. His goalie coach is former Blue Jacket netminder Marc Denis, someone who Gibson gives high marks for taking his game to the next level.

His reaction time is exceptional as he is skilled in making the tough save with his fast glove hand, as well as on deflected shots.

A couple of areas of his game that need some work are his puck handling, especially behind the cage. It is something that Christopher wants to add to his sizeable skill set, and there's no reason to think that he won't be successful here. The other is his breakaway management. With the reality of shootouts looming large, he needs to work on and apply his sense of timing so that he is able to control the situation, not simply react to what a shooter is doing.

"He's a very confident goalie, has an air of confidence about him. He's got very good net coverage, has good size and is very strong in his crease. He plays determined and aggressive, his movements are controlled, he tracks the puck very well and he challenges properly and holds his ground. He battled hard in all areas. He has a good, solid butterfly, was quick at gathering in any loose pucks and has good overall quickness."

Christopher Gibson is a lightning fast netminder with roots to Columbus in his current goalie coach, Marc Denis. With Steve Mason as the #1 goalie, and other prospects already in the system, drafting a goalie may not be high on Scott Howson's draft agenda. However, Gibson thrived in an environment this past season in Chicoutimi where his team allowed a lot of pucks on the net. Sound familiar?