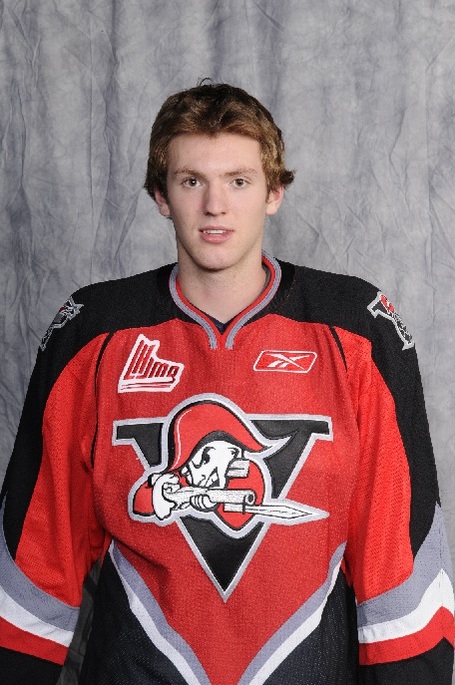 (Photo courtesy of the QMJHL)

One of several players who were in the conversation of potential #1 overall picks leading up to this season, Sean Couturier comes from a strong hockey pedigree (his father, Sylvain Couturier is a former LA King, and Sean was born in Arizona while his father played in the IHL as part of the Phoenix Roadrunners), lead the team to their first ever QMJHL President's Cup last season, and nearly pushed them into the Memorial Cup before being unhorsed by the Moncton Wildcats. With back to back 96 point seasons in the Q, it's clear he's got a great deal of offensive talent, but his defensive skills are nothing to sneeze at, with a +55 this year, claiming the best +/- record in the QMJHL in 2009-2010 with a +62, and a .544 faceoff percentage.

Couturier also has not been as dominant as he was a year ago, but the rangy pivot still has an elite skill-set to match an imposing frame. Again, he doesn't project to be a dominant player at the NHL level, but he could be a very good first line center with his size and ability to score in a tight-checking league like the NHL.

Two words: Jordan Staal. Couturier is exactly the same type of player, able to skate, score, check, and shut down the best, and he's filling out his frame impressively. Those calling him "not as dominant" in his third season of major junior are generally overlooking the fact that the guys beating him out in terms of pure stats are all overagers, and even then he's still a top 5 player. When measured against the peers of his draft class, he stands out exceptionally well. I'm generally in favor of Howson moving the #8 pick to get immediate help for this team, but the one player who would make me hesitate, should he be available, is Sean Couturier. Imagine Columbus building the kind of depth down the middle that Pittsburgh has, using Johansen, Vermette, and Couturier? It's a powerful image.