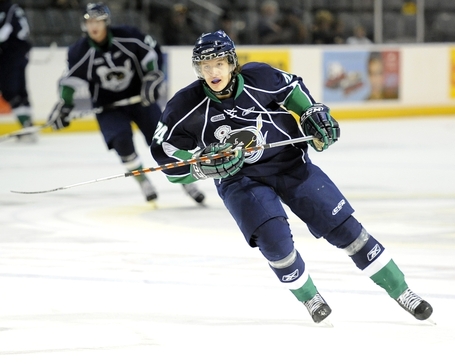 A 1st round import draft selection of the Plymouth Whalers, Rickard Rakell spent much of this year in the shadow of countryman Gabriel Landeskog, but quickly ratcheted up the draft board in the eyes of NHL scouts at this year's World Junior Championships after Landeskog went down to injury and Rakell stepped up for Team Sweden in his place. Though it's still early as he adjusts to the North American game, he was nearly a point per game player for Plymouth in his rookie season, and came in at #30 in NHL Central Scouting's final ranking of Domestic skaters. While most expect him to be a second round pick, a strong showing at the NHL combine this week might bring him up into the late first round discussions.

...he came into the year off the chart a bit but has quickly entrenched himself as a legitimate prospect and was rewarded with a nod for the Swedish World Junior squad. He's an above average skater who just does a lot of things well and is a player that a coach can use in a lot of situations due to his versatility. After playing mostly on the wing, he's been thrown into a center position and made the transition fairly easily. He competes hard and leaves it all on the ice and also has a bit of grit which is a positive as well. Decent offensive threat and there's no doubt that his upside isn't capped with what he's shown thus far.

He shows high level skating ability, and rarely coasts when he's on the ice. He provides a lot of energy without being overly physical and all seems to gravitate towards open ice. He has some finishing ability, but with his good vision and strong hands he probably projects more of a playmaker. He has decent size and appears to be one of the stronger players on the ice, but he doesn't tend to get into battles for the puck or for position all that often. His play is strongest in the middle of the ice where he could utilize his speed and his quick hands.

Frequently compared to countryman Loui Eriksson, Rakell has a good bit of skill, awareness, and skating ability that would match well in the Scott Arniel "puck pursuit" style of up tempo hockey. Though he's relatively new to the North American game, the fact that he brought so much offensive punch to his rookie year is encouraging, and by all reports he's working hard on filling out his frame, going from 185 at the start of the OHL season to 191 in the most recent reports. While I don't see him as a likely first round pick, if he should slip to the second round I could easily see Scott Howson tapping Rakell to help keep building offensive forward depth - particularly since he's been versatile enough to play at wing or center depending on the needs of his team. Though I respect concerns about his physicality, it seems that he's the kind of player who can get into a battle when required - he simply prefers to find ways around opponents instead.

You can see Rakell's first OHL goal here for a good look at his shot - very fast and clean.

For some of his setup skills, take a look at how he helped create Sweden's first goal in the WJC semi-finals vs. Russia.