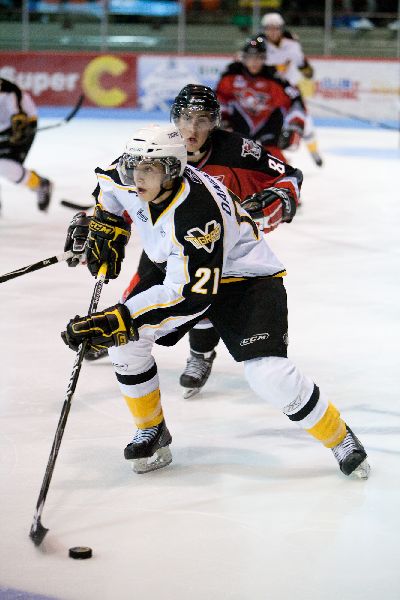 A skilled two way forward, Danault last season made the switch from center to the left wing. Phillip's defensive ability earned him this season's Guy Carbonneau trophy, awarded since 2005 by the QMJHL to the league's best defensive forward.

Playing for his hometown of Victoriaville has been a goal of Danault's since his childhood. After the January trade of then captain, Philip-Michael Devos to Gatineau, the 17 year old Victoriaville native was asked to don the captain's "C" by Tigres' General Manager, Jerome Mesonero. In a passionate hockey region, such an honor for such a young man does not go unnoticed.

Danault's physical development appears to be his only downside. The remedy for that is simple, by spending more quality time in the gym. His upside is exceptional though, as he brings knowledge and a passion for the game, along with a two way skill set that aren't often duplicated.

"He'll bring work ethic, dedication and leadership. His passion for the game is unique because he's the most passionate kid I've ever coached. He plays with pride; he's not the type of kid who thinks he's better than the next guy, but he challenges himself to be as good if not better."

Established as a skilled player at both ends of the ice, Phillip's junior experience as a PK player further elevates his stock. His versatility in playing either center or left wing gives his game added depth and an added dimension. Despite the minor negativity about his physical development, Danault is a physical player, something that will only continue to improve as he matures.