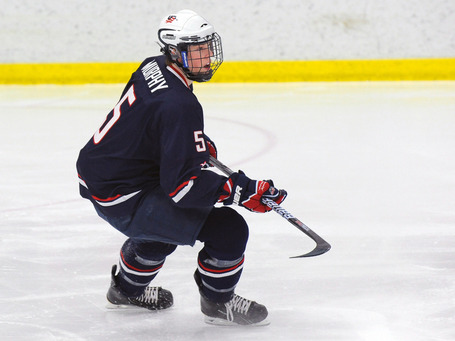 Sometimes, a prospect's parentage has as much to do with the interest behind him as his on-ice skills. In Connor Murphy's case, he might be an excellent target for the Jackets because of his father, former Jackets' assistant coach Gord Murphy, and his background. Raised here in Columbus (ok, Dublin if you want to get technical), Connor is a product of the AAA Junior Blue Jackets, then was invited to the US National Team Development Program. He recently committed to Miami of Ohio, where he'll start in the fall. Beyond the pedigree, though, he's a d-man with a strong skills package, and though he missed much of last season in the USHL due to injury, he put on a spectacular show at the U-18 Worlds this Winter, where he lead the Team USA defense with three goals and a +7 rating, including scoring the OT game winner for the US in the gold medal game. Ranked as the 25th North American skater by Central Scouting (which did not reflect the World Championships), his performance at the Worlds lifted him to #18 in ISS's final Top 30 ranking.

ISS had Murphy in the first round discussion early in the season but he failed to impress for most of the season and slipped or landed in our falling discussions frequently. Murphy emphatically erased much of that doubt with his performance during the World U18 Championships and sealed the deal by ending the tournament in dramatic fashion by netting the OT winner in the gold medal game. The son of former NHLer Gord Murphy, Connor is versatile, mobile and at times mean and seems to thrive when push comes to shove.

Aside from being another feather in the cap of Ohio youth hockey, and a powerful "legacy" tie for the team, Murphy's skills, mobility, and good old fashioned meanness (in carefully measured doses) are all things which would be great to put into the Jackets' pipeline, and we know that Miami of Ohio is doing great things developing young d-men (as we've seen with Will Weber), which could be a great way to let him grow into his size and develop his skills before putting him into the AHL. The one red flag for me is his injury history - Murphy has battled stress fractures in his L5 vertebrae he says he's fully recovered from, once he let it heal, but that could scare off a lot of GMs. I'd be very interested to see what kind of performance he turns in during at the NHL Scouting Combine in a few weeks.

Not much in the way of live video, but here's an interview with Connor filmed immediately after the gold medal ceremony at the U-18 Worlds.

Also, for a good sense of Connor and some of his struggles the past few years, here's a good interview from McKeen's where he discusses his journey back from injury and his hopes for the future.