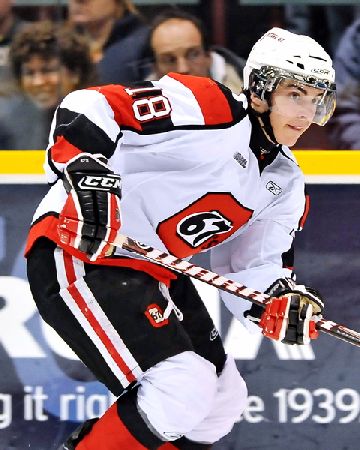 After being acquired by the Ottawa 67s from the Kitchener Rangers midway through the 2009-2010 season, Shane Prince in his first full season for the 67s finished second in team scoring, trailing only OHL league co-leader, Tyler Toffoli.

Listed at 5' 11" and 185 lbs, Prince's size and perceived ruggedness may become a factor in determining his draft fate. Shane was on the receiving end of a crushing Michael Latta check in mid-January, which left him out of the lineup with a shoulder injury. In March, Prince was involved on the receiving end again, this time a check from Tom Billingsley of the Niagara IceDogs, which resulted in a head injury and a 10 game suspension for Billingsley.

His 67s teammate, Dalton Smith, is already a Blue Jackets second round pick on the left wing, something which may reduce Prince's likelihood of donning Union Blue at some point in the near future. This is not to say that there isn't some terrific upside to his game.

After a somewhat disappointing 2009-2010 season, Prince came back strongly and significantly improved his defensive play, something that was sorely lacking the previous season.

Prince is very quick and has good bursts of speed and is very elusive on the ice. More of a playmaker and makes a lot of good plays in the offensive zone, but has also been willing to shoot the puck more this year. His defensive game needs a lot of work as he’s fairly one dimensional, but his offensive production is more then offsetting that right now, although he will need to prove to critics he’s more then a dominant junior player with little professional upside.

As already stated, Prince's teammate and another left wing, Dalton Smith is already a CBJ draftee, which may or may not reduce Shane's likelihood of becoming a Jacket. His dedication this past season to improving his two way play, his ability to set up his linemates as well as a break out season would make him a welcome addition. Sizewise, he's got the potential to be another Matt Calvert type player.