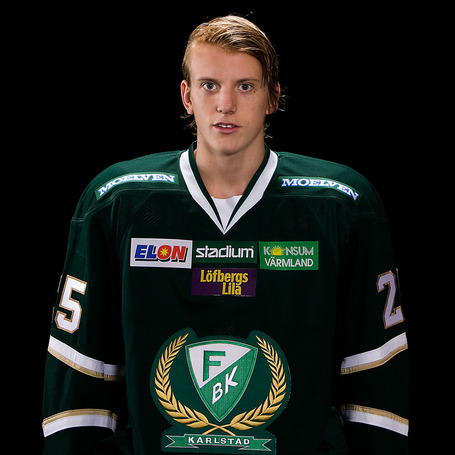 Despite being the #3 ranked international skater by ISS Central Scouting, Jonas Brodin has been regarded as something of a mid-tier prospect, likely to go later in the first round. A strong "defensive" defenseman, he's been labeled as a good "two way" player and regarded as a very mobile puck mover. Despite that, he really hasn't been a strong offensive presence in Farjestad BK's U18 or SEL teams, though he did have an impressive burst of three goals and two assists in 9 games with the Swedish U18 team earlier this year. Likely to be more of a "shutdown" d-man because of his instincts and mobility, he's a hard worker but needs to develop his frame more before being likely to compete in the NHL.

Brodin is a lanky defender that skates extremely well and has great lateral ability across the ice. Does a great job of buying time for himself and escaping the forecheck to move the puck up ice. Good defensive skills and very methodical in positioning himself.

A two-way defenseman, Brodin has very good mobility and skating ability. Plays a calm, smart game in his own end. Does well in board battles. Has a solid frame, but could use some bulking up.

Another later round possibility should the Jackets trade back in the first round as part of working to acquire more NHL ready help, Brodin's skills are very similar to 2009 first round pick John Moore. Good speed, strong skating ability, great on-ice vision. The only difference is that Moore works more on the offensive side of his game, while Brodin seems to be developing into a guy who can read the play and make the right moves to break up offense and start the transition going back the other way. That's a valuable skill set, especially given Brodin's relative youth. A team willing to draft him and then give him a few years to develop and grow into his frame might find themselves with quite a gem in a few years.