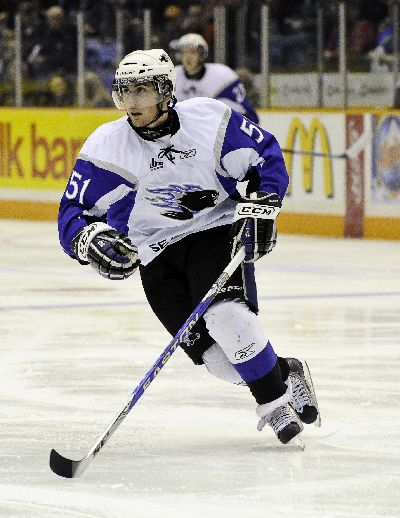 "You don't know what you've got 'til it's gone." That moment came for me in preparing for today's Prospect Profile on Zack Phillips. During my research, I discovered that Phillips played his prep school hockey (Eaglebrook Academy) about five miles from my doorstep. Another missed opportunity!

Since his time here in Franklin County, Zack moved on to Lawrence Academy in Groton, MA. After his one season for Lawrence, he had committed to playing here in Hockey East, for UMASS-Amherst. However, a different opportunity then presented itself, and Phillips found himself able to become part of the Saint John Sea Dogs of the QMJHL.

After a successful second season for Saint John, where he tied for sixth in league scoring and won the QMJHL champioship, Phillips and his mates opened up competition for the Memorial Cup on Friday night with a 4-3 victory over host Mississauga. Phillips' head coach for Saint John is none other than former Blue Jackets bench boss, Gerard Gallant.

"Zack has great vision and is strong on the puck. He's a solid center and has come a long way in a short time. He kind of reminds me of an Adam Oates-type of player … he's strong on the puck down low and in the corners and has nifty hands."

"Zack is a very talented two-way ice hockey player who has a bright future ahead of him. He sees the ice extremely well and is a creative playmaker and pure goal scorer."

Using Coach Gallant's comparison to Adam Oates, Phillips becomes the type of forward that the Jackets desperately need. The Oates type player that can go into the corners, yet still keep his scoring touch out front should make Zack a mid first round selection. Phillips would eventually add a new dimension to an offense that sorely lacks playmakers. Currently, if the forward isn't named Nash, Umberger or to a lesser extent, Calvert, the depth isn't there for the Jackets. A player of Zack Phillips' caliber would be a nice addition for Columbus.