Today in the "A": It's Just Business

Share All sharing options for: Today in the "A": It's Just Business

Today in the A, I pay homage to the recent discussions of NHL clubs on the move. While fans in the desert apparently have halted the Phoenix Coyotes to Winnipeg talk for now, We have a new player:

Today in the A(TL):
The hot story from Thursday night was the imminent departure of the Atlanta Thrashers for The MTS Centre in Winnipeg. Or so reported the Globe and Mail. While the denials then also started flying, a discussion with AHL president, David Andrews also in the Globe and Mail reveals that the "A" has a Plan B, just in case.
"A" is also for Abbotsford:
Heading further west, the Abbotsford Times reports the Heat incurred losses of about $500K more than expected. Quick geography lesson, AHL style (that's Abbotsford, BC at the far left): 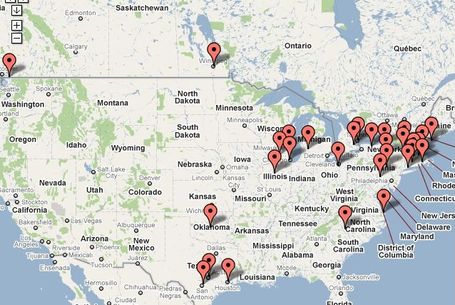 For the record, the shortest trip is to Winnipeg which is 1381 miles. It appears no move is imminent for the Heat, but a minor league club that annually loses over a million dollars is not good news. Particularly for those who underwrite those losses.

Lehigh Valley Phantoms?
If you're still looking at the map, you'll see the red dots in eastern Pennsylvania. The northern one of the two represents the Wilkes Barre/Scranton Penguins. The other marks the Hershey Bears. Somewhere between the two lies Allentown. There has been a long standing battle between city politicos and downtown business owners. The short version: Politicians want to build a brand spanking new arena where the businesses are located. Arena cost? Only in the $80-$100 million range.

The lure for the people of the Lehigh Valley? Raiding the Flyers farm club. The Phantoms had played at the old Spectrum in Philly from 1996 until 2009, when the old barn was scheduled to be torn down. The Phantoms moved to Glens Falls, NY where they have just finished their second season in the Adirondacks.

Maybe the Allentown city council should call the mayor's office in Abbotsford?

Terry Pegula's Shopping List - Part 2:
Finally, the Maine Hockey Journal takes an in depth look at a story that I visited on Wednesday.
The story deals with the effect to the Portland franchise in the event the Buffalo Sabres group does indeed buy the Rochester Americans of the AHL.

If you can follow the bouncing ball of afflilations, Buffalo wants to be in Rochester. Tampa Bay, who wasn't even part of any discussion, apparently will end their agreement with the Norfolk Admirals.

The Lightning will then move their prospects to the former Blue Jackets home in Syracuse. After the Jackets left the 'Cuse for Springfield this past season, the Anaheim Ducks sent their AHL recruits to Syracuse.