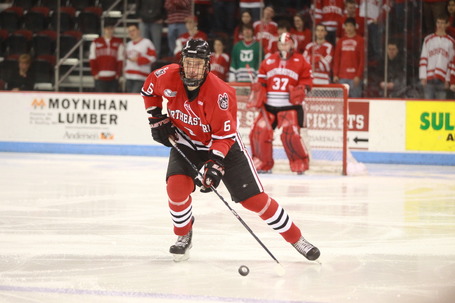 Though some look at his size and frame and bill him as this year's Zdeno Chara or Tyler Myers, Oleksiak is more of a pure shutdown defenseman, though there's certainly potential for him to develop his offensive skills. A dual citizen of Canada and the United States, he chose to become part of the USA hockey program, and played three seasons in the USHL with Sioux Falls and Chicago. A freshman this year at Northeastern University, he stepped in and lead the team in +/- while eating heavy minutes as one of their top defensemen. A late riser in Central Scouting rankings, he went from the 27th ranked North American skater all the way to 13th by the end of this season, and was the second youngest player to be invited to Team USA's World Junior selection camp. Though he did not make the squad for 2011, if he continues his strong performance he's likely to be a lock for 2012.

A huge defenseman with terrific reach and strength. Moves very well for a man his size. Has superb agility and athleticism. Oleksiak can deliver thunderous hits and uses his stick effectively to break up passes.He also has great hands and puck skills, which could see him blossom into a very solid two-way defenseman.

His mobility is surprisingly good for a big man, although he does need to improve his agility and pivots/turns. But as far as straight-line speed goes, that long, powerful stride of his covers a lot of ice quickly. There isn't much offensive upside with Oleksiak-- he scored just two goals in 82 USHL games over three seasons with the Chicago Steel and Sioux Falls Stampede, and in 10 NCAA games he's posted a 1-1-2 line. But, if he can be that shutdown guy with a condor wingspan and an edge to his game (a work in progress), he'll go in the top-three rounds.

Though the Jackets have some good defensive d-men prospects, there's nobody with Oleksiak's sheer physical power in the pipeline. You can't teach size, and that's one thing that he possesses in spades, though it does remain to be seen if he can truly harness it to take off like Chara or Myers. In honesty, he'd be a bit of a reach at #8, but if the Jackets were to trade back into the first round, I could see Oleksiak as a legitimate mid-round choice.

He's #6 in red / maroon - a bit hard to see, but I'm afraid it was the only good highlight / recap video I could find.