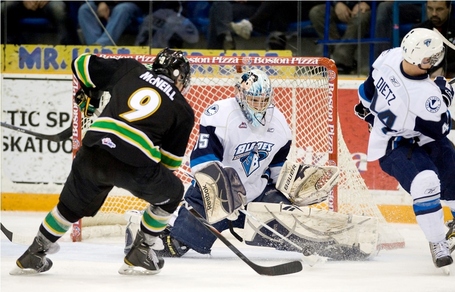 Photo by Liam Richards, courtesy of the WHL

A power forward who provided a good bit of the Prince Albert Raiders' offense as they made their way into the WHL playoffs, McNeil started the year regarded as a hot prospect, but one with several areas he needed to improve - in particular his quickness and skating ability. Though that continues to be a question mark, he has made steps to improve, and had a solid tournament for Team Canada at the 2011 World Under 18 championships, which further raised his draft stock. He's got a big, heavy shot, and he's more than willing to use his body in driving to the net, delivering a hit, or dropping the gloves. A total package, it's not surprising that he's been a player that scouts have had their eye on all season.

A forward that coaches can turn to in any situation, McNeill is a hard nosed player who competes at both ends of the rink. He may not have the most pure skills when compared to some of the top draft-eligible players, but with his hustle and anticipation, he is able to jump on loose pucks and he will be able to contribute at the NHL level.  He has managed to be a PPG player with very little help on a subpar Raiders team this year.

As a point per game player in the WHL, especially with his size, it's hard not to compare him to Ryan Johansen. He may not have the pure skill level of last year's 4th overall selection, but he brings an intense work ethic, and knows how to drive to the net while using his teammates to make plays or set up scoring chances. (In fact, it's hard for me to look at him without comparing him to Rick Nash in some ways, and R.J. Umberger in others.) With the team's weak depth at Centre, he could be a big piece of the future, but concerns over his agility and speed might lead to concerns over fitting him into Scott Arniel's system.