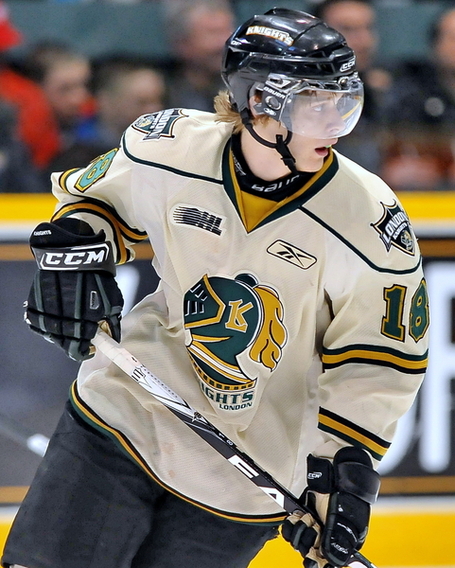 (Photo courtesy of the OHL)

Namestnikov is a smooth skater who can move up and down the ice fairly effortlessly and also is a very good puck mover. He sees the ice well and makes a lot of smart decisions with the puck which makes his linemates a lot better. Really lacks a lot of strength which is a big issue for him as he does get pushed around a bit, and he really needs to find a way to add some weight in the future.

With a versatile playing style that has allowed the Knights to switch him between Centre and Wing, Namestinkov was willing to take a blind leap, jumping into the OHL from the Russian hockey system this year, and has taken off as a result. Though he's still learning the North American game, and all reports indicate he needs to work on developing his body and conditioning, there are a lot of good indications that he could be one hell of a top six playmaker in the near future. While there are some who rate him down because of the "Russian Factor", his English is excellent, and the fact that he was willing to come to the OHL this year after the Knights drafted him seems like a sign that he's willing to do whatever sets him up for success in the NHL.