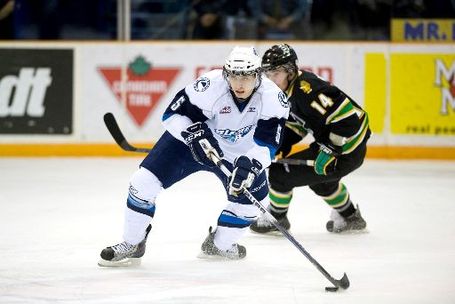 Duncan's role model as a defenseman for the Saskatoon Blades is Hall of Famer, Scott Stevens. If you are going to pattern your game as an up and coming defenseman, you would do well to emulate one of the best. Another, in what is shaping up as a fine defensive class, the six footer has established himself as one who can move the puck with authority. Also, partially as his 121 penalty minutes might indicate, Siemens isn't afraid to take the body, nor mix it up.

"He's a guy that is really tough to play against. Sometimes I think he over-does it, tries to do too much, but he's got all the potential. He can carry the puck, he's a tough kid -- he can fight. He's tough to play against. He can work both ends; he plays both the power play and penalty kill. He's just a solid, all-round defenseman."

If defense is where Scott Howson wants to build the Jackets, based on their selecting at 8th overall, he'll have some choices to make. It could be Duncan Siemens. The crop of young men preparing to be drafted this June show the poise and athletic ability to build great NHL careers. Specifically, Siemens' puck handling skill (he was an integral component of the Blades power play this season) and his punishing physical presence would make him a welcome additon at Nationwide.