Springfield Falcons: On a Clear Day

Share All sharing options for: Springfield Falcons: On a Clear Day

Today is "Clear Day" in the American Hockey League. For sixteen of the thirty AHL teams, it sets their playoff roster. Over the past seven years for Springfield Falcons' fans, it's meant an opportunity to see what junior prospect might play a few games here as the Falcons played the string out on another dismal season. Despite really bad hockey under the not-so-watchful eye of the Edmonton Oilers, I have to admit that I'm really glad I had the chance to see Jordan Eberle in person over the last month of the season for the past couple of years. Maybe, just maybe if the Falcons miss out this season, we'll have the opportunity to see Ryan Johansen test the AHL waters.

This year, I am holding out hope that despite the brutal week the Falcons had last week, there is still a glimmer of hope that this will be the year when the Falcons return playoff hockey to downtown Springfield.

What is "Clear Day" and why is it important? Follow along after the jump to find out. In case you've read my teasers before and wondered why you clicked through, please follow along because in addition to Clear Day talk, there is some great Falcons info and a John Moore story that you have to read to believe!

Rather than have me botch an explanation of exactly what Clear Day is, here it is directly from the source, the official AHL website:

Each Clear Day roster consists of a maximum of 22 players. According to AHL by-laws, only those players listed on a team’s Clear Day roster are eligible to compete in the remainder of the 2010-11 AHL regular season and in the 2011 Calder Cup Playoffs, unless emergency conditions arise as a result of recall, injury or suspension.

Teams may also add signed junior players or players on amateur tryout contracts, only after their respective junior or college seasons are complete.

The Clear Day roster of the Falcons looks like this:

Something to remember is that this is for eligibility, not guaranteed playing time. I mention this because you will notice Matt Calvert prominently displayed on the roster. Also current Blue Jacket, Kyle Wilson is listed.

The Jackets obviously take precedence regarding the rosters. Matt Calvert will be on the Jackets roster until the Jackets are done for the season. If their struggles continue and they play themselves out of a spot and the Falcons are still able to make the postseason, Calvert may be sent down early, to offer his special brand of help.

Wilson was a great pickup for Springfield after the callup of Matt Calvert. Now that the Jackets have committed a roster spot in Springfield, I would think that as soon as the forward situation is resolved in Columbus, Wilson will be headed back to the Falcons.

Speaking of injuries, several key Falcons remain sidelined. This is where the "emergency" part of the roster is somewhat flexible. Currently on the shelf are:

Filatov suffered a concussion last Wednesday in Hartford, and with the current amount of caution given to concussions in the game, it may be some time before he's back in the lineup.

Left off the roster ("In Residence") are:

The goaltending situation remains stable as it has since early November with the tandem of David LeNeveu and Gustaf Wesslau. Statistically, both netminders are practically equal. LeNeveu has played 35 games with a respectable 2.89 GAA. Wesslau in 27 games has posted a 3.18 GAA. Save percentages are identical for both keepers at .898, and that's one of the places that the Falcons have come up short. Like many parts of their games this season, the Falcons have just played adequately. There have been nights where they've been terrific. Other nights, they've played dismally. However on those in-between nights, when a key save might have made the difference, or a timely 2 on 1 break out, or even that crushing check at the blue line could have changed a game, it just hasn't been there with any consistency.

One area where these Falcons have excelled all season long, is in community relations. I have had the pleasure of attending several events in the Springfield area where Falcons' players have been on hand. For example, back during the holidays, the Falcons paid a visit to the Springfield YMCA where they shared holiday gifts with some local families. Take a minute to check out the photos from that day, right here! It's true that not all of these young men will be Blue Jackets. But take a look at these guys and you can see the character that they have brought to this community and some day will also bring to Columbus.

The local public schools were closed for vacation during Presidents Day week. The Falcons, embarked on a schedule that was hectic to say the least. Monday, Trevor Frischmon and Steven Goertzen joined Director of Media Relations, Damon Markiewicz and mascot Screech at the Amelia Park Children's Museum in Westfield. The team had games Tuesday (a 5-0 home loss to Manchester) and Wednesday (an inspired 4-2 win in Worcester). Thursday, an entourage of players, and Damon's game night crew made their way to Tower Square in Springfield for the Falcons' annual "Floor Hockey Clinic". 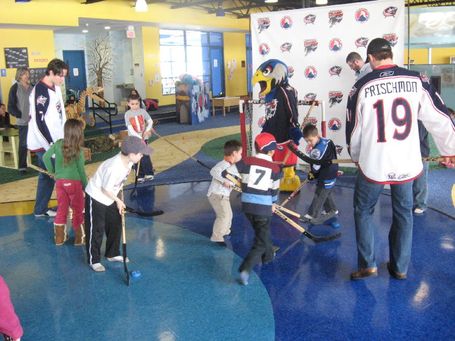 My kids think that I take them to all these games and events for them. HA! If they only knew how I live vicariously through them. The Tower Square event was amazing! This event was first class right from the start. When we walked in, there was a table set up with entry forms to win a variety of prizes. First prize was a goalie stick that was signed by the whole team! No, I didn't win it.

Set up around the Tower Square Meeting Room, there were three separate stations, each working on different skills.

Station #1 featured Theo Ruth and Cody Goloubef. I've noticed that everywhere Ruth's first name appears in print, it's always "Theo". I've seen him referred to as "Teddy". The other players on hand called him "Ted". I asked him what he prefers and he told me that any of them are fine. Maybe once he gets accustomed to being in the limelight, he'll settle on one.

Station #2 had Nick Holden and Brent Regner. I took notice that neither of the Falcons' goalies were on hand, so it turned out that all the players took time to get between the pipes and face the worst that five to ten year olds could unleash. Although it's probably too late for a career change, both Nick (in goal, below) and Brent held their own against the kids! 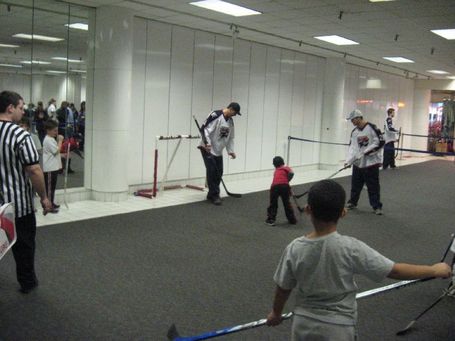 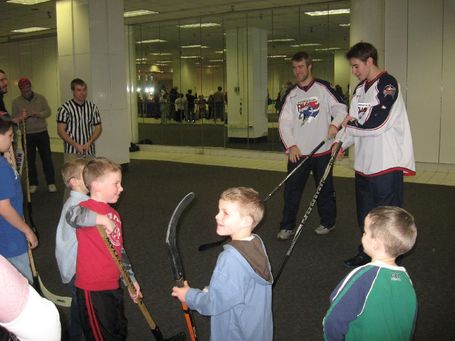 Station #3 was anchored by standouts David Savard and John Moore. Their station was originally set up to work on passing skills. After a few rounds of passing though, Screech came by to play goal and Moore organized a little game of his own. Moore's Breakaway Challenge saw the kids shooting on Screech. You score, you stay. If you don't score...well the picture says it all. Moore's Sin Bin! 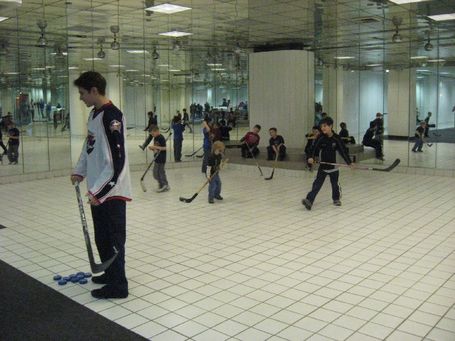 I had heard a story earlier in the week about John and his big opportunity to play against the Blackhawks at United Center. The story revolved around his transportation after the game, his accomodations and his equipment. Moore tells the story best (and with a big smile on his face):

LB: John, what was it like to play in your hometown?
JM: It was a thrill to play there! It was great to have an opportunity like that.

LB: I heard that you got to stay the night at your house?
JM: Yeah, my Dad drove us home. My brother was in the car with us. He had a game that night. It was like old times, just us in the car, going home after a game.

LB: I'm guessing not too many guys can say they play an NHL game and then get to go back home?
JM: It was nice. I got to sleep in my room. I just wanted to get a little rest, but Dad made sure that we both put our gear out to dry first."

As was the case on Monday at the museum, the excitement on the faces of the players was apparent. These Falcons have a bond that I haven't seen on teams here in a long time. I was talking to Brent Regner and mentioned what a great win the game in Worcester was. Brent didn't shy away from talking about Tuesday's blowout loss at home. "We needed a game like that (win) after Tuesday night. That was a bad game and we needed to go out and prove something. We're still in this!"

In the eight days since the trade deadline passed in the NHL, the Falcons have not had it easy. Two skilled, popular and energetic players in Sestito and Byers were traded away. A heartbreaking loss on Wednesday night in Hartford. The Falcons tied the game on a Tomas Kubalik goal with 42 seconds remaining in regualtion. Then, with just 8 seconds to go, the puck took a bad bounce off the glass and the Whale's John Mitchell buried a one-timer for the game winner. Saturday night the Falcons hosted the rematch with Connecticut. This was the annual "Pink in the Rink" night, with Falcons Charities presenting a check to the Mary Kay Foundation for breast cancer research in the amount of $30,000. Also, the Falcons wore pink jerseys which were auctioned off after the game. These were, in my opinion, the best looking "Pink in the Rink" jerseys worn by a Falcons team yet. 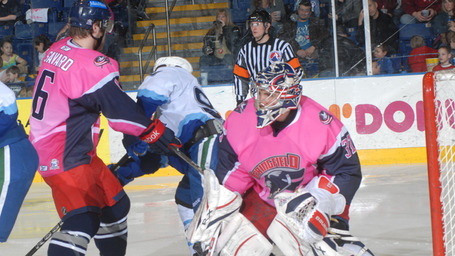 This was the fourth near sellout crowd of the season, and for the fourth time the Falcons came up short. This time, the Whale engineered a third period comeback which sent the game to overtime. With just 28 seconds remaining, newcomer Blake Parlett tipped in a Kris Newbury shot giving the Whale their second consecutive come from behind victory over the Falcons. The week drew to a close with reliable Kyle Wilson being recalled by the Blue Jackets. Then, the drained Falcons traveled to Portland, ME for a Sunday afternoon matinee with the Pirates. The Pirates showed no mercy, sending the Falcons back to Springfield on the short end of a 6-1 score.

As of this writing, the Falcons are five points out of the last playoff spot in the AHL's Atlantic Division. Much like the parent Blue Jackets, the time is now. If either or both teams expect to play past the second week of April, there is no more time for last minute losses, overtime losses or shootout losses. No, the time is now - it's running out, but for the present - it's now. Both the Blue Jackets and the Falcons have worked too hard this season to let the playoffs slip through their gloves.