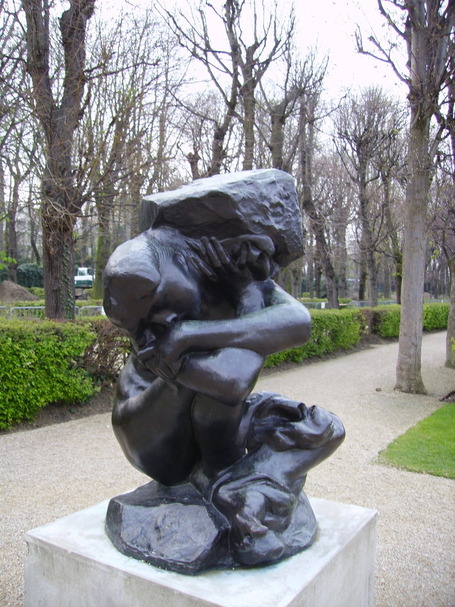 (Used with the permission of Yair Haklai)

One of the earliest (and to me, most fascinating) uses of art as architecture began with the tradition of the Caryatid, a Greek innovation dating back to at least the 6th century BC, and there is evidence to suggest they were actually in use even earlier than that. Graceful sculptures of beautiful women, often representing the goddess Artemis or her devotees, these slender forms were key to the structural support of the building, forced to shoulder an impossible load.
I learned about Caryatids by reading Heinlein, and his discussion of Rodin's The Fallen Caryatid, pictured above, who struggled against her burden, but could not maintain it. Despite that, however, she keeps pushing back, trying to take back up the load and push her stone (and with it, the building) back into place.
What does this have to do with hockey? Absolutely nothing, or absolutely everything.
A hockey team, particularly one in the precarious position the Blue Jackets currently occupy, is built on the shoulders of its' caryatids. From the most obvious in the form of its' goaltender, who must constantly shoulder the greatest load of all, to those who are trusted to provide its' offense, or the unsung but vital masters of the penalty kill.
Even those who are less vital on the ice, but play a large role in embracing the community through visits to schools, hospitals, and charities shoulder their own loads, in their own ways.
In recent weeks it seemed the Jackets had lifted the burden and brought themselves back to order, restoring the hope of the fans as it rested on each cornerstone. Now, seemingly brought low again beneath their burden, we wait and cling to the belief that once again these icons can rise up, and lift us all anew.
(If you're in the mood to see what our opponents are up to, go check out Jewels From The Crown. But I'll be they didn't include something you can trade for class credit.)

Which player will lift up the team tonight?