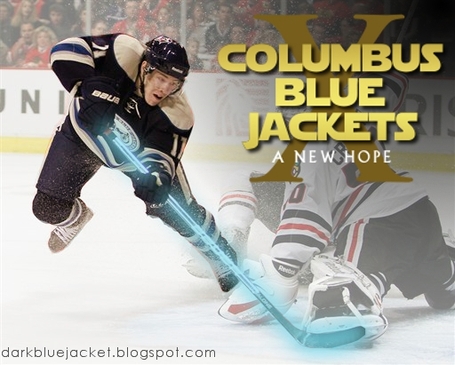 (Huge props to Tom over at DBJ for his photoshop!)
It is a time of apprehension for the fans of the COLUMBUS BLUE JACKETS. Though the team has played well since the all star break, striking from Nationwide Arena and the road, they still remain a few points back of the coveted playoff spot.
With the TRADE DEADLINE fast approaching, Scott Howson continues to work to provide help to the team, while head coach Scott Arniel works hard to keep them prepared for each challenge.
Now, after a few days of rest following their victory over Chicago, the team faces their most hated enemy, Barry Trotz and the Nashville Predators, and though they have lost Ryan Suter to injury, the Predators have been bolstered by the acquisition of Mike Fisher, and the return of one of their most hated players....JORDIN TOOTOO.
The Blue Jackets must step up to the challenge as they face the Predators tonight, despite the loss of Derick Brassard, but they have an advantage they did not possess in their last meeting - a forward named MATT CALVERT.
Essentials:

This is the last meeting between the two teams in Columbus, but they'll meet twice more in Nashville before the season ends. For the Jackets, it really couldn't come at a better time - the team is 6-1-1 in their last 8 games, while the Preds have been sputtering, for lack of a better word, going 4-3-2 and coming off a 3-2 loss at home against the Coyotes where they lost the services of Ryan Suter.

The biggest thing the Preds have going for them is the addition of Mike Fisher, who has provided a goal and two assists in four games since his arrival in the Music City. It's less about the contributions on the score sheet, though, and more the message that the team is going to really try and make an impact in the post-season this year - all the jokes about Carrie Underwood aside, I can't think of a bigger buzz around a deal by David Poille since they acquired Forsberg in 2007. I've no doubt that even with their recent inconsistencies (the team is in a bit of a "Lose one, win one, lose one, win one" rollercoaster), that has to be a big confidence boost for the room.

For the Jackets, though we continue to hope that Scott Howson will be active at the deadline to bring in some help for the team's weak points, the best news has been the way the team has risen to the challenge from within. Even the injury to Derick Brassard and the potential absence of Kristian Huselius, who missed practice again on Monday, hasn't dampened that, thanks to the strong play of Rick Nash, R.J. Umberger, Grant Clitsome, and rookie Matt Calvert, who has turned in an impressive effort since reaching the NHL earlier this year. His nose for the net has him second in goals for the month behind Rick Nash, while he just recorded his first multi-point NHL game on Friday. His speed and hands have been turning heads since he arrived in Columbus, and he's stepped up to the challenge when asked to play on the top six.

With the Jackets trailing the Preds 1-1-1 in the season series to date, a strong win on home ice would go a long way towards increasing the team's chances.

Keys To The Game:

The Jackets are hot and they've been rolling all month. If there was any time to get up on their Central Division rivals, it is now. A win tonight puts them in striking distance of 8th when they play Phoenix on Friday. While I'd prefer to avoid a three point game if at all possible, the Jackets need two points any way they can find them.

It's gonna be a big, nasty matchup tonight. I would expect Calvert to play on the second line if Huselius is out, giving them his speed and aggression, and if Derek Dorsett is reactivated for this evening, he'll likely go back to the third line to provide that little nasty edge.

Tidbit: The Star Wars opening crawl is iconic, but it might have gone a slightly different direction...