If you are a sports fan of a certain age, and you paid attention to the NFL, you will remember a certain press conference by (then) Arizona Cardinals head coach Dennis Green.

"They are who we THOUGHT they were, and we let them off the hook!"

It was, perhaps, a bit more poetic than Scott Arniel's "We pissed it away" comment, but the sentiments line up rather exactly.

What's worse for the Blue Jackets is that this game wasn't just the two minute collapse we might characterize it as. It was truly a 40 minute collapse, broken up by a few jump-starts during the second and third periods as the Jackets slowly let the Predators back into the game.

If you look at the chances, the Predators almost always scored off sustained pressure and rebounds - something Columbus also was able to do on the Carter and Vermette goals, so that's a positive, but it's concerning how often the Preds had a chance to get a big juicy opportunity.

I'll go ahead and say it - you wonder if Arniel could give Steve Mason a chance on Saturday if he doesn't like what he sees from Sanford in practice.

As the joke goes, it wasn't how many, it was when. The team generally weathered the even strength chances from the Predators against the second line without a problem, but they generally did NOT convert on the chances created while Tyutin and Nikitin were on the ice, and those three shorthanded chances against our top pair were the real killers.

While we sometimes complain about over-use of the top D pairings, I don't think you can really blame Arniel for sending out what had been the top PK unit for the only PK of the game - particularly late. 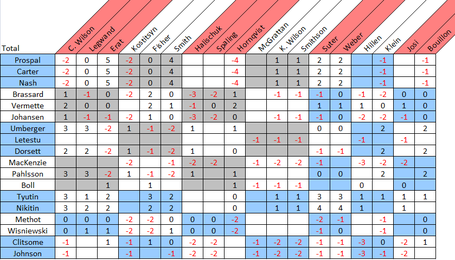 You can see some evidence of Barry Trotz (and Arniel) performing line juggles during the game, but I'd argue our top line did what they needed to do last night, while Mark Letestu was pretty quickly dropped to the fourth line in favor of the RJ / Sammy / Dorse combo. Hard to blame Arniel for that when you see that combination was a hell of a cocktail against the Predators all night.