Watching last night's game, it seemed that the Jackets had control for 63 of 65 minutes (not counting the shootout), while Montreal was able to snatch a couple of bad plays and exploit them in hopes of snatching victory from the jaws of defeat.

When you look at the scoring chances, it's remarkable - even incredible - that this game went to OT, much less a shootout. Perhaps the game was not as insanely offensively dominant as some performances this season, but the Jackets were certainly in the driver's seat all night, and Carey Price was huge for the Canadiens.

If you read the numbers, Kristian Huselius, Rick Nash, and Jeff Carter were a major force in this game, while R.J. Umberger seems to have gotten a serious jump-start down on the fourth line. Derek Dorsett continued some surprisingly good lay, and Nikita Nikitin was insane last night. Simply out of his mind. If he can keep this up, expect to see him factoring in more scoring very soon. 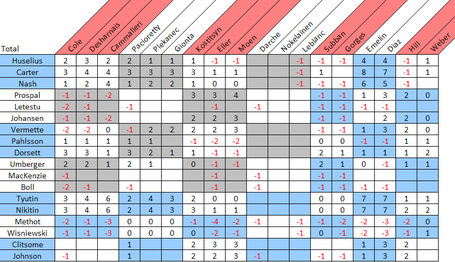 It's really a damned shame that Juice got hurt (again). It seemed like the chemistry was finally coming together for them. Now we're back to the line roulette, and it will be interesting to see where the Jackets go from here. Will Brass be given a look at the wing in the top six, do you re-elevate Prospal or Umberger, or a wildcard from Springfield?

Thursday's lineup will be a very interesting question...