Well, that was distinctly unpleasant.

After a dominant first period, the Blue Jackets let the Oilers take over the game - despite Derek Dorsett giving them an advantage on the scoreboard after 40 minutes, it was pretty clear they were being outplayed, and this time it caught up with them - hard.

Best E/S Forward: Derick Brassard (+4), but that's deceptive, because Brass was on the bench for significant chunks of the third period. Best player who actually was out there all game? Derek Dorsett (+2). 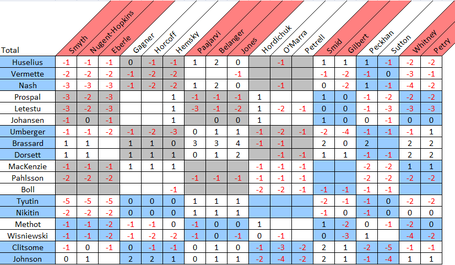 At this point I'd like to erect a giant sign that says "WELL, THERE'S YOUR PROBLEM!" and point it at Fedor Tyutin.

Toots has historically been a better player at home than on the road, but this road trip in particular he's really suffered. I realize the team is not in a position to bench him in Montreal, but I can't help but wonder if spending a match at home in the press box might help his game.

Some of these matchups aren't perfectly accurate because of Lineup Card Bingo during the game, but you get a pretty decent idea.

Also, our top line is getting its' ass kicked by Ryan Whitney? What?