Reliving this game again was a rather painful exercise, but the story here is as much about adjustments as anything else. Looking at the numbers, it seems clear that Barry Trotz made adjustments, and Scott Arniel didn't. There's your ballgame.

When none of our defensemen are in positive numbers, and only one line of forwards is remotely positive at even strength, the phrase "cherry picking" comes to mind. Either Arniel was waiting for very specific matchups for the Nash line, or he was being very careful where he put Derick Brassard onto the ice. It certainly supports the "showcase" theory in my mind...

Half of the shots taken by each time ended up being a scoring chance or a goal. As much as I'm frustrated with Columbus' defense, Nashville really did NOT have a good night defensively, either.

What I really find interesting (and frustrating) is that after two periods where the teams basically traded long stretches of momentum, the Jackets actually did a ton of things right in the third period until the final five minutes. They really locked down and prevented the Preds from getting good looks until that final power play...and then the doors came off. 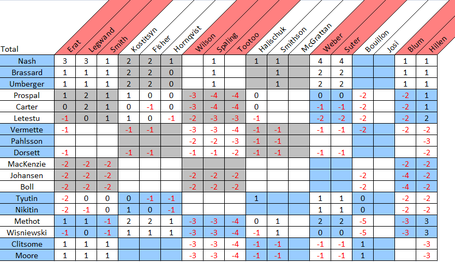 Speaking of "it's not a coaching problem" problems - has anyone else noticed that Columbus consistently sucks against other teams' third lines? We give up more scoring chances to third lines than we do to top lines, regardless of the matchups. Is this a coaching call? Are players not taking their opponents seriously?

Or do they just want it more than we do?