It's time for the return of a phrase you heard a lot last year: Bowling Shoe Ugly.

The second period of this game was exactly that for the Blue Jackets, and the team as a whole (as you've heard quite a lot today) probably deserved to leave the Saddledome with their heads down and tails betwixt their legs after a wretched overall performance.

But, for all that, there were some positives, and 2 points is 2 points...

Some of these numbers were no doubt affected by the line changes and shuffles during the night, but the fact remains that most of the Jackets impact players were wretched last night. The one area the team actually performed well was on the PK. The Jackets denied Calgary with the extra attacker and did an exceptionally good job defensively while shorthanded.

Seriously, that second period should have iced this game for the Flames. Curtis Sanford deserves a LOT of credit, because he stole the show last night. 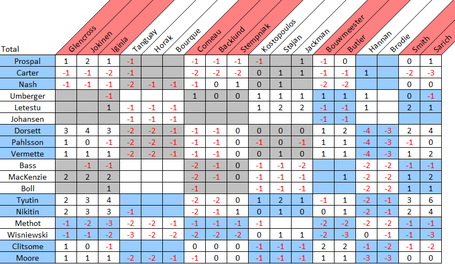 Not all of the line combinations are truly accurate because of the juggling going on during the night, but it's pretty clear that Arniel heavily protected Johansen, who was limited to just 14 minutes.

Meanwhile, Derek Dorsett went out and Made Shit Happen all night. I would love to see what might happen if, for example, Umberger was dropped to the third line with Pahlsson and Vermette, and Dorsett was given a chance to run with Johansen and Letestu...