No matter where you put the frustration with last night - goalie, coaches, defense, all of the above - the Jackets pissed away a great effort once again, and the numbers bear that out. We probably saw the best games we're going to get out of Tyutin, Brass, and Nikitin this season, for no gain. Incredibly frustrating, especially because the team did so many things right in the first 40 minutes, only to let it slip away in the final frame. 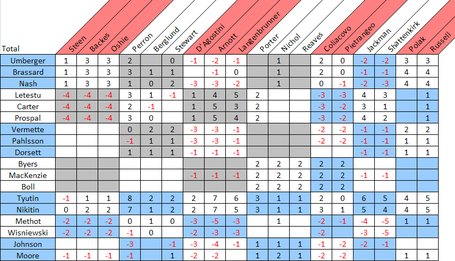 Despite their struggles against the top line, I think that Letestu / Carter / Prospal line bears experimenting with further.

Meanwhile, does John Moore have to break someone's knees to get some PP time?