A serious concern has been brought up by a variety of commenters on the Cannon and other Columbus hockey sites, and it bites at the back of my head too. Are the Jackets going to improve at any point? And more significantly, is there any hope for the future?

It's a legitimate fear - if this team isn't actually talented enough to get anywhere, if the Jackets are really stuck with no hope, will we have to suffer through a full rebuild and watch the team be completely awful for another 5+ years before the franchise can reemerge? And if they're that bad, shouldn't the team just start over right now?

Thankfully, I don't think the team is that bad. Or rather, the team offense shouldn't be nearly this bad. However, it's obvious that something isn't working. I submit that right now the whole team is less than the sum of its parts, suggesting that some sort of chemistry or coaching problem may be to blame. But a baseless opinion doesn't really help here - let's take a look at career goals per game values for each player and the projected scoring output for the team versus current performance. Let's find out just how far off each player is from a career average year and then where the whole team would be if every player was at their average goals per game.

In order to analyze goals per game for the team, I'm going to use the roster that was iced for the game against Tampa Bay on December 17th. It comes without Huselius (as has been typical for this year) and with Brassard in the lineup. Now I'll take the career goals per game data for each player from Hockey-Reference.com. Then, I'll get the current goals per game for the model lineup and compile the data in order to compare. It's worth noting that this method will reveal a higher goals-per-game than the actual current value for the team (2.33 right now) as it assumes all players in this lineup playing every game. Particularly, Carter, Wisniewski and Brassard are in - all players that have been injured/suspended/scratched at various points. Their offensive contribution will inflate the totals.

With that caveat, here's what we find.

Goals Per Game Differences and Projections 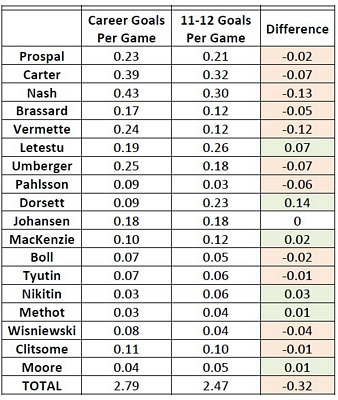 There are 11 players in this model lineup that are below career goal projections. Out of these, a few are having just slight deviations from prior averages (like Tyutin, Prospal, and Boll) so their per game values aren't all that poor. However, there are players with massive deficits. "Leading" the way are Vermette, Nash, Carter and Umberger - four players that we would expect to lead the team in scoring. I'm going to take a closer look at these guys and their historical performance in a moment.

Also from these data, there are 6 players that are exceeding average goal-per-game norms - but only one is doing so in a meaningful way. That one is Derek Dorsett. He's already at a career high in goals, is fourth on the team in scoring and will continue to have an above average goals per game value throughout the season. But unless he somehow ekes out even more production, his standing on the team doesn't end up looking all that good. Dorsett's 7 goals is 4th most on the team, and only one player currently has double-digit goal numbers (Nash). This isn't encouraging and is ultimately to be expected from the team given such poor offensive performance.

This kind of team-wide inability to perform seems unlikely to continue next season, particularly for four of the best forwards - Carter, Nash, Vermette, and Umberger. In order to give this claim a bit more context, let's also take a look at the goal total projections for each roster player at the 33 game mark (where we are as of this writing) and the 82 game mark (a full season without games lost to injury). I've projected at the number of goals each player would produce with their career goals per game value and 2011-2012 goals per game value. Again, the numbers don't exactly match current values due to rounding and actual number of games played, but this provides a more tangible number rather than a pure ratio. 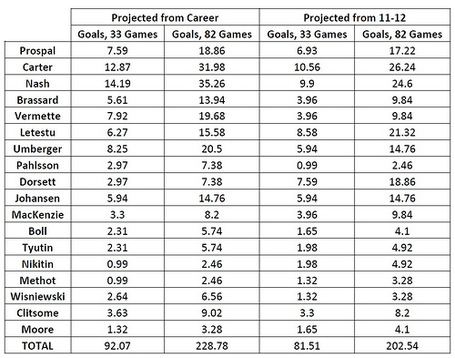 While we could take a look at any player and discuss their performance, I'm going to focus in on the four previously mentioned forwards.

It's clear that their current-season projections are rather bleak, but just how bad is rather stunning. Jeff Carter, even at a full 82 games, is projected to have his worst total goal scoring season since 06-07 (the last time he didn't score 30 goals). Having already missed 11 games, his actual total could only project for 71 games or 22.72 goals. Rick Nash is set to have his worst single season since his rookie year and has never shown the ability to go completely injury free for an entire season. That would only lessen his eventual total (although to what extent depends on his final number of games). Antoine Vermette is also set for his worst season since his rookie year, the only year where he averaged less than 12 minutes of ice time per game. Lastly, R.J. Umberger is looking at his worst since 07-08 in Philly, the last time he didn't play a full 82 games.

That's some serious career-level underperforming by 4 players who should (rightfully) be expected to carry the offense. Quite simply, it's going to go up from this. Both Carter and Nash are proven elite goal scorers while Vermette and Umberger are excellent 2nd/3rd line talent that have shown their ability to consistently produce 20-30 goals per year. Even if they get back to career averages, Carter, Nash, Vermette and Umberger would get 6, 11, 11, and 6 more goals in a full season than they are currently set to achieve. They'll get back to those values unless something is hindering their performance.

Total Team Goals Per Game and Where to Go From Here

At the beginning of this post I argued that this year's team is less than the sum of its parts. This is revealed by taking a look at the goal total and team goals per game information. If each player was performing at career averages for the year (and all players were in the healthy lineup) we would be seeing a team goals per game of near 2.79. As of this writing, that value would give the Blue Jackets the 11th best offense in the NHL (the current 10th place Rangers have 2.87 and 11th place Sharks have 2.77 goals per game).

Curiously, in a Blue Jackets history perspective, an individual-average goal performance out of the selected lineup would also result in the best 82 game offense in franchise history. The 228.78 goals would surpass the 226 goals scored in the 08-09 playoff year. This suggests that, on paper, the 2011-2012 Columbus Blue Jackets should be the most talented offensive unit ever gathered by the organization. And if players come back to their average values (as can be reasonably expected), we should see some of that on-paper performance translate to the ice.

Then what is so wrong to cause a 26 goal deficit from the career average projections right now? The projection for this year's goals-per-game numbers would result in 202.54 goals over the season (2.47 goals per game for the team). And it's worth remembering, these projections don't assume that players will miss or have missed time - they simply indicate what would happen in an 82 game season for the collection of players from the Tampa game at their current pace. The actual 11-12 goals per game value (2.33) would yield a 191.06 goal campaign - even worse than the proposed lineup I've analyzed.

There are two problem that seem most likely to me: team chemistry and coaching. Chemistry is the most likely problem if the players simply cannot mesh and are stuck producing below typical levels. To be fair, that doesn't sound all that far from what we're watching right now out of Nash and Carter. Both are noted as shoot-first, high percentage goal scorers. Placing them on the same line makes them out of sync. Instead of being the focal point of their offensive line, each player must surrender puck time and shooting opportunities to the other. Ultimately, they're not playmakers so they each end up missing out on opportunities. If chemistry is the central problem, then the team should be reorganized and players should be traded to maximize compatibility. This doesn't mean that there isn't room for both Nash and Carter, just that they need other players that can feed them or compliment their play style.

But this doesn't seem to explain Vermette, Umberger, or other players with low goal totals, nor does it explain why Nash and Carter continue to play together after so many games of low production. This is where the coaching argument takes hold. Scott Arniel has been unable to get career averages out of his players, even after a preseason and 33 games with the current lineup. Beyond not being able to install an effective system for the team, Arniel is also doing line juggling in the strangest ways. This is something that has been discussed at length elsewhere, but is a valid point. If he can't get the players to produce and can't set lines that would even pretend to have chemistry (talent players with goons? No thanks), the team offense is going to suffer.

I feel that the exact offensive problem lies somewhere in the middle, although I'm sure other theories exist (team psychology, number of offensive defensemen, and more). But as it stands with the chemistry and coaching problems, I can't help but notice that very little has changed. Mark Letestu and Nikita Nikitin have both been brought in, but haven't honestly bumped team offense that much. Lines aren't being changed significantly or logically and Nash and Carter continue to play together.

On paper, this team is full of talented offensive players and young scoring talent like Ryan Johansen and Cam Atkinson are positioned to improve or join the lineup over the next few seasons. The future looks good for the Blue Jackets offense. This is one element of the team that should improve by simply seeing players return to their career averages. How they do this (and if they rise above their average values) might depend on changes in chemistry and coaching - things that could help the paper version of the team come closer to reality.