OK, remember how sometimes I do these and I say something wildly unpopular but nobody really notices or cares?

Right, time for me to do that again.

Despite the fact that the Kings ran up 41 shots against the Jackets, I think Scott Arniel was trying to use the trap last night as a way to get around the team's lower energy, and I'd argue that for a good bit of the game, it was working.

You'll see what I mean in a second.

Until the wheels fell off following LA's second goal (and I'd argue the team had their nerves rattled by the first goal being allowed despite the pretty clear interference), the Jackets did a great job of keeping LA from getting shots in high scoring chance areas, particularly in the second period where they pretty much put LA in the edges of the rink and didn't let them out.

If that Brown goal hadn't happened (and I can almost guarantee that the reason Gagne and Williams racked up follow-up chances was the team trying to shift out of trapping mode to an attacking one, and failing), this game has "grind out victory" written all over it.

As much as the trap is a dirty word, the Jackets were doing a pretty solid job of executing it lately - it's certainly a big part of where the win over Vancouver came from. But it goes back to the questions of identity for this team. Are they a team that will try to get one or two goals and just squeeze the life out of a game for the remainder of regulation, or are they meant to take destiny into their own hands?

I'd argue that Scott Arniel is showing himself better suited for the former, and that's where a big part of the problems stem from.

(Oh, and some may ask about D-Mac's second period shorthanded attempt? He was in the scoring chance area but too far away from the net on the missed shot for me to count it. I normally look at missed shots from <15 feet as being valid chances, he was at over 24' when he went high and wide.)

How nice to see the top line actually better than even at E/S. I'm not even being sarcastic - this is what we need from them in tough games like this.

The third period really was where it all went wrong - just as it was against Nashville, and as it nearly collapsed vs. Vancouver. This can't continue. It just can't. 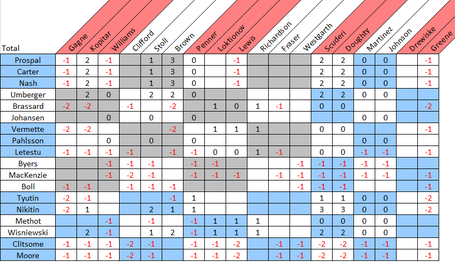 Squint, and you can figure out both coaches' line juggling during the game.

It seems like, all things considered, four of our 6 d-men played well in the tighter trapping role, but the third pair (likely shifted more in the third in hopes of offense) struggled hard. So do we keep them in and work on improving the offensive punch, or is it time to shuffle pairs and make a callup or deal to improve the defensive grind?

My personal opinion is I'd rather watch a game where the Jackets win 7-4 than a 1-0 shutout, but two points is two points, and the team sure seems like they can't do either while they try to be both at once.