Tim Thomas has technically never defeated the Blue Jackets. He has an OT loss and a regulation loss, but the recent wins by the B's over Columbus have all come with Tuukka Rask in net - including last night, given that Rask was put in goal for the third period.

That's kind of a shame, because Thomas did the bulk of the work last night to give his team a win.

The Jackets did a few things wrong, but they did a lot right - particularly at even strength - where the problem was the Bruins had few chances, but converted on nearly half of them to control the game.

Moore's numbers (and for that matter, Clitsome's) are in part because of cherry picking and matchups, and I get that, but I am flummoxed that Moore, Clitsome, and Vermette saw no PP time, especially during the Lucic double-minor. meanwhile, I cannot help but look at Ryan Johansen and think that he's going to break through in a big way soon....and putting Derick Brassard on his line looks like a very shrewd move by Scott Arniel.

The first period goals by the Bruins were back-breakers. The Jackets had textbook momentum and a dominant performance shredded by them. Give the Jackets credit for a good second period, too, but this team disappeared in the third - though I wonder how much of that Claude Julien adjusting his defense to protect Rask. 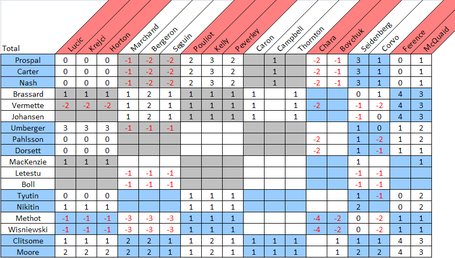