Bowling with the Falcons

Share All sharing options for: Bowling with the Falcons

The Springfield Falcons proved once again this week that a "small market" franchise can certainly pull off some "big league" events for their fans.

This time, it was "Bowling with the Falcons". An event that was originally scheduled for November 2nd, then had to be postponed due to the region-wide power outages after a late October snowstorm crippled much of the area. 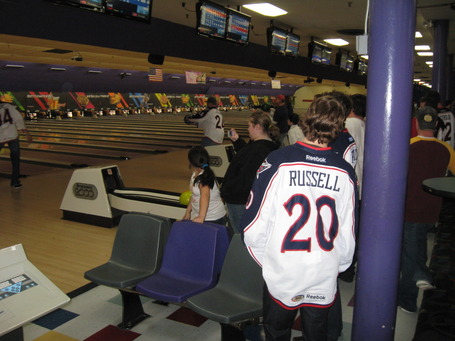 I'm a firm believer in the adage, "time flies when you're having fun". I'm also sure that I'm not alone when I say that these were two of the fastest moving hours that I've enjoyed in some time.

The Falcons front office team did their usual top-notch job in organizing the event and coordinating the night so that the entire roster of players and a couple hundred ticket package holders and corporate partners were able to share smiles and stories all night.

The plan was for the Falcons players to move every 10 minutes or so, with the expectation that each player would make it to each pair of lanes. It didn't quite work out that way, as the players genuinely seemed to be enjoying themselves and the opportunity to pose for pictures and sign autographs.

The players were all generous with their time and made sure that they posed for every picture and signed everything that they possibly could.

My Springfield Hockey Heritage Society "business associate" was my seven year old, which reduced my bowling time to exactly one ball thrown all night (a strike, for the record). After a few gutter balls, he moved to a lane that had bumpers blocking the gutters, something that made his night even better.

After Mike Kelly's terrific player introductions, Brent Regner and Ryan Russell were the first Falcons to join us. While Ryan was directing traffic among the kids, I asked Regner about his development this season. Brent said that it's been a lot of hard work, but there's still a way to go. I mentioned his increase in playing time this season, saying that it shows with all of the guys who were here last season, that the overall confidence in their game is much higher this season than last. Brent said that he thought the added confidence is a result of the whole team working hard.

As our conversation was shifting to non hockey activity in the winter, it was time for the players to shift to the right, which brought David Savard and Cody Goloubef next.

Cody was most recently listed as being out with an "upper body injury". We talked briefly about that injury. It came as a result of blocking a shot in last Saturday's game against Connecticut. His left arm was in a sling, and he will be out for awhile. Through it all, his feeling was that "it's part of the game". If you check out the photo gallery, his smile didn't go away the entire night.

The next shift of players brought rookie defenseman Dalton Prout and new dad, Nick Holden. The recurring theme of the night made itself known here, as both Dalton and Nick were all smiles the whole time.

Next up was Paul Dainton. Manny Legace had started the night bowling with Paul, but excused himself just prior to the next move. Dainton had just been recalled from the Chicago Express, with Allen York being sent down to the ECHL the day before.

Paul said that he was happy to be back in Springfield; that it is nice to be back where things are familiar and have the opportunity to be around friends.

After Dainton moved along, I thought about how many pictures each player had to smile for, how many autographs they signed, and yet they were still on their game, giving back to the fans. Not to mention, still smiling after talking to somebody like me!

The next movement brought leading scorer Martin St. Pierre and Cam Atkinson. As Cam took to the approach, he let one fly, crushing a perfect strike. I suggested that Cam had the potential to be a multi sport superstar. We talked briefly about playing in the NHL and the AHL. Cam is well spoken and professional and whether it's Columbus or Springfield he is a genuine team player and a credit to the organization.

Somewhere in this time frame, the players were in the process of shifting yet again. Brett Lebda and Tim Spencer were the next Falcons to bowl with the kids. Also, while this shift was happening, Matt Calvert moved along and was in the process of accepting a challenge from Atkinson. The challenge perhaps started earlier in the evening when Cam tweeted:

Bowling with the boys .. How many strikes if any will @mattcalvert11 get?? I say #thebiggooseegg #zed #0

As everybody was settling in, suddenly things got very quiet for a moment when Martin St. Pierre took a huge tumble over his foul line. Particularly unsettling was knowing this is the Falcons leading scorer, splayed out about seven feet beyond the foul line.

Like the consummate professional, St. Pierre bounced back up, brushed himself off and got right back to business. Only after he was alright did the laughs begin. In fact, in the world of 140 characters or less, Atkinson again had the situation pegged:

Great turnout at the #alley with the fans . @mattcalvert11 is #brutal . Highlight of the night #39 falling on his face #classic

Brett Lebda and I spoke about his journey which has led him to Springfield. Lebda had a tough time last season. He had signed a free agent deal with the Toronto Maple Leafs. He was then traded to the Nashville Predators. Nashville, in turn, ended up buying out Lebda's contract.

Lebda, in 11 games with the Falcons, has played some really good defense for the Birds. Additionally, he has added one goal and five assists and is currently playing to a +5, in +/- numbers.

He, like the rest of the players, is happy to be on a team that relies on and appreciates the skill set that he brings to the club. At 29 years of age, he has plenty of time left to get back into the NHL, something that he feels he is capable of doing.

Tim Spencer is another Falcon who is playing on a PTO. In a twist of irony, Lebda the former Stanley Cup champion was paired with Spencer, another really positive character guy, who has yet to play in the NHL.

Spencer, a mountain of a man at 6'6" and 230 pounds, throughout his junior and early pro career has never shyed away from a physical brand of play. I asked him if he thought that at his size, if he found it a necessity to be an enforcer or if he thought he'd have the chance to find a scoring touch.

Tim said that he brings a lot of energy to the rink. He thinks that it's likely that he ends up in a role where he has to stick up for his teammates and he does so with no reservations because his teammates would gladly do the same for him.

This was an outstanding evening put on by the Falcons. It was easy to detect the team unity that this club has. I found that the group, as a whole, wasn't there out of any sense of obligation (like the fashion show scene from "Slapshot"), but the players were looking forward to a night like this where they could be themselves, away from the pressure of being under the microscope for just one night.