Best E/S Forward: Vinny Prospal (+5), but special mention to R.J. Umberger for his +4 at ES and +4 on the PP. He was in Scrivens' kitchen so often that the Leafs rookie probably thought he was cooking the post-game meal.

Worst E/S Defenseman: John Moore (-1)  - Aside from Steve Mason, Moore was the only Jacket with a negative E/S rating, but Moore was part of the one shorthanded scoring opportunity.

I think I've finally cracked the Aaron Johnson enigma. The reason he's got so many positive scoring chances is that he's the most aggressive roamer. In fact, it's far more likely that he'll shoot the puck from inside of the high success area than anywhere else - and that's also why he's so frequently burned defensively.

So here's my radical idea for the day: Convert him to a RW and put him on the third line in place of Cody Bass, and let's see what happens.

For all the talk about the Jackets not getting good quality shots (and there were a number of those - I'd probably say 15-20 of the 39 shots weren't terribly good opportunities), we have to also recognize that this team did a LOT of things right last night. 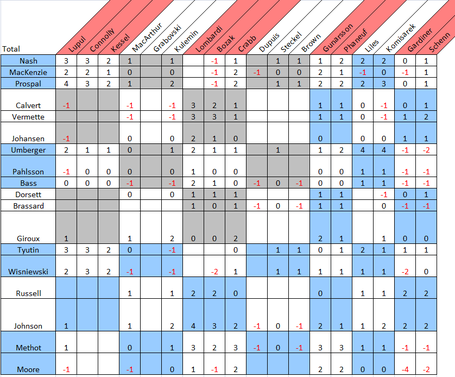 Interesting to see that the Nash line was generally used as a power for power matchup against Kessel, and that really, it worked very well. Same with Tyutin and Wiz, and you can see pretty clearly that Umberger was simply in Beast Mode all night.

Marc Methot also turned in a surprisingly strong performance - if he can keep playing like this, you have to think it will start making life easier for whomever ends up in net going forward.