If you guessed that last night's game was a low-chance affair to go with the low scoring, you'd be right.

If you guessed that things were pretty even, again, you'd be right.

If you guessed that the Jackets had their best chances on the power play and failed to convert....well, dammit, you're right again.

Once again, this was a very winnable game, but the Jackets had a slim margin of error against a team that doesn't allow many good opportunities (though to their credit, they also kept St. Louis' opportunities very low.)

A few things jump out from these reports. 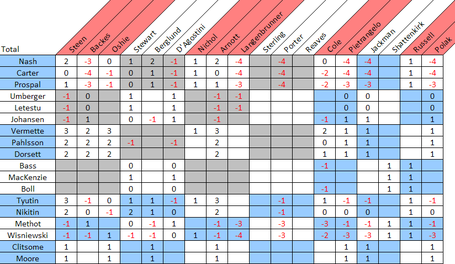 Some of the H2H results are a bit weird because of Hitch actively shuffling his lines during the game, but you get the general idea - including the fact that the top line really needs to be kept away from David Backes!