If you don't mind, we're actually getting a nice opportunity to look back at a game, so please take a moment to review the scoring chances from the Jackets earlier matchup vs. Buffalo.

If you recall, a big part of the problem was generating shots, but not really generating chances, and the Jackets allowing the Sabres top line to walk all over them.

Not surprisingly, things have improved, but goaltending was still a big part of this Jackets' win.

The Jackets ran riot over the first period, and dominated the early second, but Buffalo began to battle back after their goalie change, particularly with their chances on the power play to put themselves back into the game. Curtis Sanford deserves a lot of credit for preserving the 4 goal margin when the Sabres turned up the pressure on the Jackets down low. 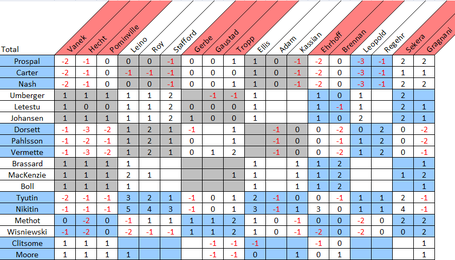 I admit I was skeptical about the Kris Russell / Nikitia Nikitin trade, but his performance since arriving in Columbus has been a revelation. If he keeps this up (and after 7 games this is looking less like an aberration and more like a trend) Scott Howson pulled in exactly what this team needed.