I said in the recap of last night's game that Martin Brodeur was huge for the Devils in this shootout win, and the scoring chances backed that up.

After a slow first period where Zach Parise had his way with the Jackets' PK unit (though Curtis Sanford was the equal of his attempts), the Jackets poured a lot of heat on #30 in red, and he was forced to stop a lot of high-percentage rubber, particularly on the PP.

The Jackets really deserve some credit for the way they responded after the first goal. That was really Jersey's last good look at the net for a long time. Also, how about Jeff Carter going into BEAST MODE in the third period? It really is a credit to Brodeur that he didn't score, because he sure as hell was trying to make it happen.

Nobody really had a bad night here. Tonight was a credit to goaltending and the New Jersey D / PK. Simple as that. 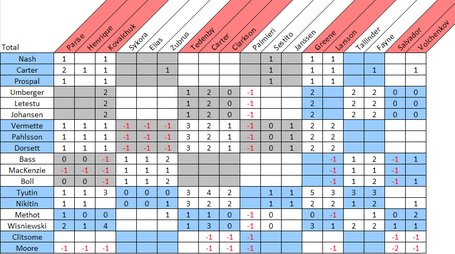