Every hockey game is a story of periods, but this matchup with the Flames more than most. In the first and third periods, the Jackets ruthlessly denied Calgary consistent pressure in the high scoring chance areas, and repated rewards from their own sustained efforts. In the second period, Columbus clearly sat back after the Jeff Carter goal and suffered accordingly - give full credit to Curtis Sanford, because this game could have easily become as unhinged as the loss to Minnesota last week.

Note: The collected stats don't include the 5 on 3 PP. Add a +5 to PP chances for Wiz, Letestu, Nash, Prospal, and Carter to reflect that if you're trying to track total chances. (Also interesting that coach Arniel put four forwards and Wisniewski out for the two man advantage.) 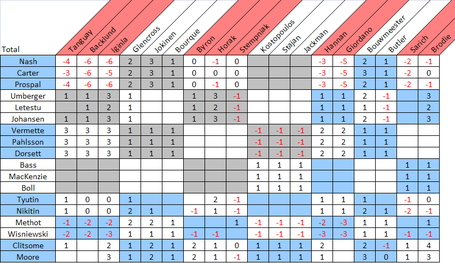 The even strength struggles for the top line suddenly become a bit clearer when you realize they were utilized against Jarome Iginla for much of the night, particularly in the second period.

All things considered, even with the struggles in the second period, the Jackets are clearly working to draw up an identity, as Scott Howson promised - they seek to be a team that makes it difficult to score, while working to create pressure of their own. If they can keep making this system work, expect to see more and more reports where the Jackets are out-chancing opponents by a solid margin.