Though the Jackets finally broke the long history of failure against Nashville, it's worth pointing out that the Predators did a very, very good job of pushing the Jackets away from Pekka Rinne and denying consistent pressure, while earning some great opportunities of their own against Curtis Sanford.

Nobody in Columbus finished with positive scoring chance numbers, and while we sometimes call out coach Arniel for his ice time decisions, when you see the low ice time for certain players and the absolutely terrifying conversion rate of the Predators against them at even strength, perhaps there's a good reason they were on the bench.

Despite the frightening even strength results, the Jackets PP shone brightly - and unlike some previous games, this time they capitalized on their opportunities. 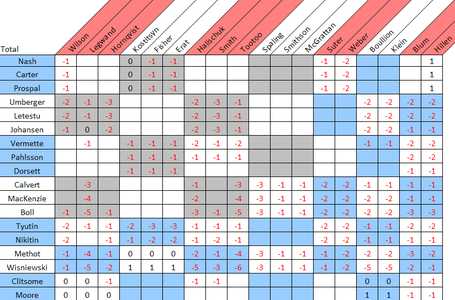