In such a low scoring game, it's not a huge surprise that neither side generated many quality  scoring chances.

What is a bit of a surprise is just how few occured - both teams did an excellent job of preventing their opponents from driving in and establishing themselves in the high percentage areas, and it really took until the 4 on 4 in the OT to loosen things up.

Does it make leaving a point on the table in the SO any easier to take? No, but at least it lets us recognize that both teams played a hell of a game.

Something interesting in the TOI: Despite going an extra 5 minutes, this is probably the most "balanced" usage of his forwards we've seen from Scott Arniel lately. 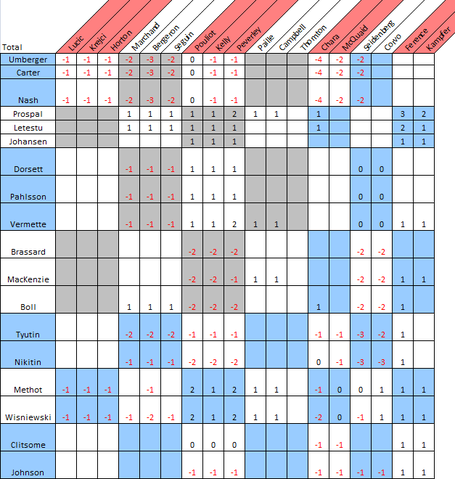 Not a great head to head matchup for the top line in general, but it's worth pointing out that neither team allowed their opponents' top lines a lot of opportunities. In a different game, I wonder if we might have seen them break out a bit more - and let's also be honest, Nash and Carter both missing on potential GWGs in OT means this might have been a very different report had they connected.