What makes this game doubly, perhaps triply frustrating is not that the Jackets blew an incredible first period, but that they had a dominant third period, too, but could not find the handle, while the Wild scored on a shot that was well outside the normal scoring chance area. Nearly every player came out ahead at even strength. It was a terrible stretch of play in the second period that blew the game for the Jackets on a night where everyone was pretty clearly working for a win.

From 9:52-9:08 of the second period, the Jackets completely lost control of the game. Until then, things were well in hand. If there's an area that deserved extensive video review, it's RIGHT THERE.

Encouraging for Rick Nash fans - of his six shots last night, four were legit scoring chances. Less encouraging is that Nash (and the first line in general) did not match well against Minnesota's fourth line. Perhaps underestimating the opponent? 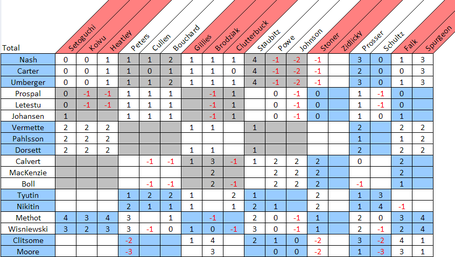