Numbers don't lie - and what they tell us last night was that Steve Mason, for all his faults, was very good last night. I'd go so far as to say Steve Mason stole this game - the Jackets were badly outchanced in the first and third periods, and only good goaltending and Ryan Johansen being just that damn good kept the team alive.

The top line's negative performance at even strength is a bit surprising, but they also had a lot of defensive zone starts to take advantage of Carter's faceoff ability which may have contributed to this. I'd also suggest that if Nash or Carter had put a few more of their missed shots from rushes on the net, it would look a little better. (Nash and Carter also had a couple shots on the rush from outside the scoring chance area, so I wouldn't say the line was our worst last night, but I'd also say they weren't our best.) 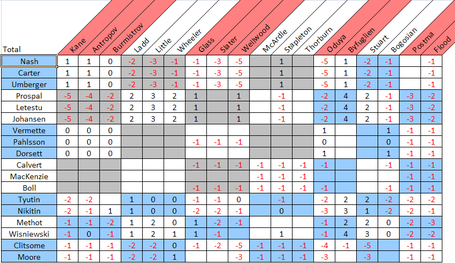 Interesting to see where our top six struggled - and where they succeeded. The "power for power" matchup against Winnipeg's first line seems like it should have been explored more, while they clearly struggled against Kyle Wellwood, of all people. Likewise, the second line didn't do so hot against Kane, Burmistrov, et al but looked pretty good vs. Andrew Ladd - perhaps a speed factor? Not a bad night for most of the D against Byfuglien, either. In fact, quite a bit of the team was able to exploit Big Buff.

There's also some big red flags on the Clitsome / Moore pairing. They had some great moments during the game, particularly in the second period, but didn't match up well most of the night.