This is, as the joke goes, where I tell you things you don't like to hear.

Outside of a really terrible first period? The new system, such as it was, seemed to be working. The Jackets actually did a very good job of denying the Blackhawks scoring chances in the second and third period. The problem is that they got scored on almost every time they did. Meanwhile, the offense finally started to tick over late in the second period and once they showed up, things began to improve quite a bit. Perhaps, just perhaps, we may see some improvements against Winnipeg on Saturday if last night's late recovery was, in part, a case of the players adjusting to the system under game pressures and getting the kinks out.

A big problem, though, is the way the team's "big guns" were fairly silent at even strength. The power play is another matter, but it's still a red flag. 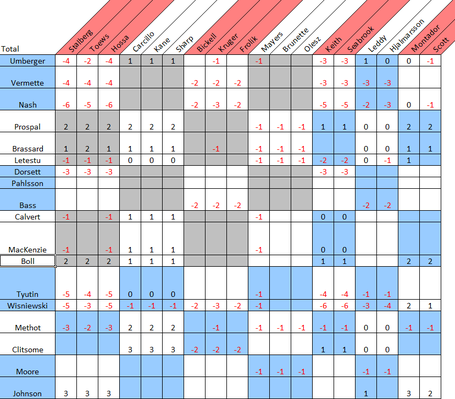 Chicago's top line / top pairing ate us alive, and much of that damage was done early.

Despite the fact he took a bad penalty which lead to a Chicago goal, Jared Boll actually had a quietly good night. Sammy Pahlsson also looks good on paper, but consider the fact he only played 10 minutes last night after making some bad turnovers.

I'm not a big fan of Aaron Johnson, either, but at this point we have to admit he's doing SOMETHING right. That said, I still think I'd rather see him as a forward.