Here's my first crack at tracking and translating scoring chances for the Jackets, and while this game certainly wasn't pretty for Columbus fans, it did give us plenty to look at.

First, the quick and dirty: While the Jackets didn't get much going from them offensively against the Wild's top line, their best package overall was R.J. Umberger, Antone Vermette, and Vinny Prospal later in the game, particularly when they were able to toss them out against Greg Zanon and Marek Zidlicky.

Despite picking up one of the Jackets' only goals, Maksim Mayorov struggled in nearly every matchup - I don't think he was the entire problem for the 3rd / 4th lines, but it's clear that he's a work in progress at this point. Likewise, Cam Atkinson found himself fairly deep in the red at even strength.

David Savard actually had quite a good night, on paper, but it's notable how much he was shepherded away from the Wild's top offensive players at even strength. Marc Methot also had an equally strong showing, and generated scoring chances against almost every unit he saw. If the Jackets had a best overall d-man last night, I'd say he gets the nod. On the other side of the coin, Fedor Tyutin struggled in nearly every matchup, and it showed both on the scoreboard and the stats sheet.

Despite having a fairly even opening period, the inability to convert despite out-chancing the Wild on the power play really hurt, and the Wild, by contrast, made the most of their opportunities when they out-chanced Columbus in the 2nd.

The Jackets took over the game in the third period, and dominated both chances and possession, but simply couldn’t dig out of the hole they put themselves into.

Head To Head Even Strength Comparison 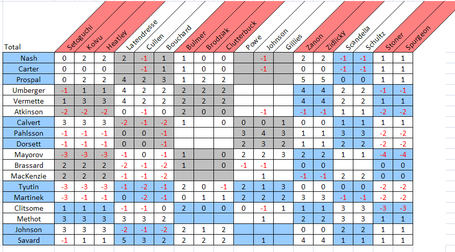 Hope you found these interesting (and that I didn't mess it up too badly) - let us know what you think!