At the same time, the third line of Derek MacKenzie, Derrick Brassard and Ryan Johansen took the worst of it, going -3, -4 and -5 in chances differential, respectively.

The Jackets won the scoring chance battle throughout, but widened the gap after going down by two goals, a perfect example of score effects. 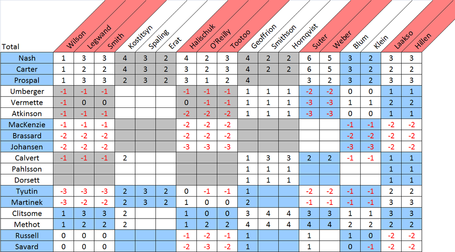 The top line beat every line and pairing the Preds had to offer, including the vaunted pairing of Ryan Suter and Shea Weber.  Note the Brassard line - they were in the red against everyone that generated a chance while they were on the ice.