Giving Every Fan A Boost: Talking to the Jacket Backers

Share All sharing options for: Giving Every Fan A Boost: Talking to the Jacket Backers

As something of a companion piece to our talk with the Arch City Army, I reached out to Julie Maurer, president of the Jacket Backers to talk about the team's official booster club.

Time for a disclaimer: I am (and have been) a member of the Jacket Backers, and served as a member of their officers for several years. At this point, though I am still a member, I am no longer involved with the officers or administration of the club.

With that said, let's get down to business!

The Jacket Backers have been in existence almost as long as the team - can you talk about how the club got started?

In the off-season of 2001, a number of fans got together and came up with the idea of approaching CBJ management with the idea of forming an official booster/fan club for the Jackets. They drew up logos and plans and requested a meeting with then-General Manager Doug MacLean. Dougie Mac thought it to be a fantastic idea and was onboard from the get-go. Our group had to apply for and attained Official Booster Club status from the NHLBC, which is a sanctioning body of NHL booster clubs. In order for our club to be eligible to go through this process, the CBJ acknowledged and supported the formation of our club. The Jacket Backers were formed as, and remain, a non-profit social corporation. Our organization is now, and has always been, completely independent of the Columbus Blue Jackets, though they have been supportive of us since our beginning. We are owned by our members and run by a staff of volunteer fans. I was not one of the fans who began the club, but have been a member since the inaugural year.

The Nashville bus trip has been a runaway success so far - what other trips are planned for this season?

Speaking of Nashville, wanted to let fans know both bus seats (on the THIRD bus full!) and "tickets only" are still available - we are shooting to take 200 CBJ fans to Music City with us on November 19th - 20th and would love to meet and exceed our goal! Travelers will have a chance to win one of three team-signed road trip logo signs in the raffle on the bus, and more. Check out our website at jacketbackers.org for lots more info on Nashville as well as all of our other travel opportunities and to sign up online. Our first road trip is actually in just a couple of weeks - we are headed up north and have 40 discounted group tickets at our Central Division rival Detroit Red Wings on October 21st - good seats still available for that as well. We're also "flying away" to Phoenix on March 2nd - 4th, 2012, the game's on the 3rd. We're accepting deposits for that trip too. As well, stay tuned for future road trips to be announced, including St. Louis in the spring. 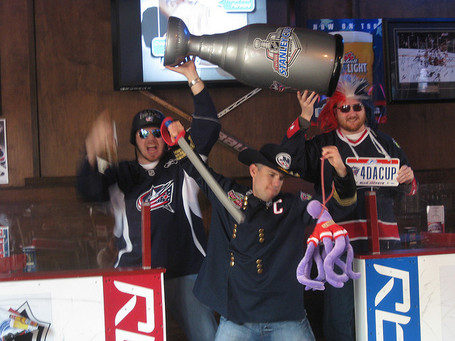 With events like the road trips and game watching parties, would you say the Jacket Backers are focused on the fan experience outside of the arena?

Most emphatically, NO! The Jacket Backers are focused on EVERYTHING it means to be a CBJ fan. As a fan, being in Nationwide to experience a Blue Jackets game and all that NHL hockey has to offer is our FIRST and FOREMOST love. It's our reason for existing. Our reason for being. Many of us have been season ticket holders from the very first puck drop; many of us go to every game we can afford to go to. Our members sit in just about every type of seating available in the arena, from Club Level to the Green Seats. We've all got our favorite angles and reasons why we'd rather be behind the net/on the angle/up above/down really close. We're from all walks of life and the thread that binds us is our all-abiding love of Jackets hockey.

We also understand that being a Jackets fan means more than the home arena experience; and for those Jackets fans that don't have the opportunity to regularly attend home games, the JB game watching parties and other JB events give CBJ fans the opportunity to socialize and have camaraderie with fellow hockey fans. Regardless if you are a season ticket holder from day 1, or have never been to a live game, what's great about getting together on our road trips and at our game watching parties is that all of us have the opportunity to sit together and to socialize while enjoying CBJ hockey, which is a different part of our fan experience than being in the arena, and adds a whole new dimension to being a Jackets fan. And often we're able to do a little bit of good for the community while doing so.

What kind of involvement do you have with the Blue Jackets front office this season? Do you feel like the club has been expanding their outreach over the past few seasons?

We've had a steady level of support from the Blue Jackets organization from the very inception of our club. From our perspective, the club has had a similar level of involvement with the Blue Jackets over the past few seasons as we have had in all other years. The Jackets organization has been nothing but supportive for our club and membership, and it has been a pleasure to work with the staff over the years.

What type of events do the Jacket Backers have planned for this season?

We have all kinds of things planned for the season, probably more than I can list here! Starting with this month's events, we have two game watching parties planned at R Bar Arena, our Official Arena District Destination, and an October membership drive with four game watching parties at Buffalo Wild Wings Bar & Grill locations throughout Central Ohio. Paid 2011 - 2012 members will receive 15% off their BWW food and non-alcohol tab through the month of October. You can look for more of our upcoming events on our website, jacketbackers.org, or on Twitter @jacketbackers or Facebook at Facebook.com/jacketbackers. Other types of events we've had in the past and hope to offer again in the future include dinners with broadcasters, in-depth behind-the-scenes arena tours, club teams participating in the Blue Jackets Bowling League, and a members-exclusive skate on the main ice at Nationwide.

The Jacket Backers have previously partnered with the Ryan Salmons foundation - are there plans to hold more events to help raise money on their behalf, or other charity events where you'll be featuring a particular organization outside of the CBJ Foundation?

We sponsored an American Red Cross Blood Drive in June in memory of Ryan Salmons and there are tentative plans for us to continue our involvement with the next ARC Blood Drive in Ryan's memory, sometime in December. We donated to this year's Hockey Beats Down Cancer tourney (thanks also to bloggers at CannonFest along with ACA and Reclaim Our Barn), which this year benefited the American Cancer Society, and would anticipate being involved in some manner to help with their future endeavors.

We were a sponsor at this year's Crohn's & Colitis Foundation of America Golf Outing as Bill Davidge and Jeff Rimer were featured golfers participating in the day's events. As our officers have been involved in the community with charity events and causes that are of special focus to them, we have recognized their volunteer efforts with modest contributions to those causes. We have not finalized our plans for all of this season's fundraising efforts. Our primary charitable focus will remain in helping the Blue Jackets Foundation and other charities or events that are related to hockey in some manner. 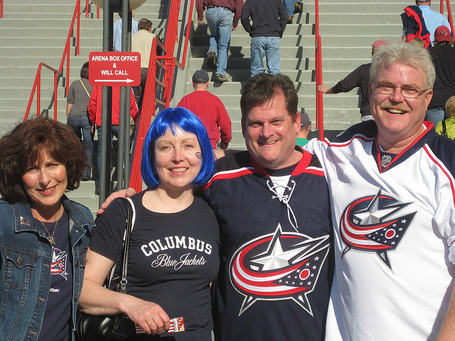 Julie, her husband (and fellow JB) Brian, and other Jacket Backers in Detroit for the 2009 Playoff road trip

If this club makes the playoffs again, do the JBs plan to arrange road trips and tickets for fans?

WHEN the Jackets make the playoffs again, the Jacket Backers will be there one way or another! In the past, with our playoff opponent being Detroit, we were fortunate enough to be able to offer group tickets to our members both at home and on the road. We were able to obtain group hotel discounts in Detroit to extend to members. We'll do our best to arrange road trips and tickets, but having said that, what we will be able to offer will be largely dependent on what team(s) we are playing and when.

As many of our members are season ticket holders, this next time we make the playoffs, just like last time, many of our members will also again be utilizing their season ticket holder benefits to help their other friends/fellow JB members to obtain playoff seats here at home. We'll fill up Nationwide. We'll hit the road to the best of our collective financial abilities and to the extent the opposing team has tickets they are willing to sell us. Also, as in the past, members will use any means in their power to obtain Jackets playoffs tickets, whether it is directly from the team for single tickets or through the secondary market. Looking forward to seeing you all there!

Thanks again to Julie and the Jacket Backers! For more info on the booster club, visit www.jacketbackers.org, or go to their table inside Nationwide Arena on the main concourse!