All things considered, this game was ugly from the word go - and both teams, though tired, did a good job of trying to eliminate scoring chances where possible.

The difference is, finally, the Jackets capitalized on one special teams scoring chance and put up strong pressure throughout the game, leading to the Johansen goal (also from the prime scoring area) and the Tyutin goal (outside the prime area, but after a long period of heavy pressure where Anaheim could not clear the zone.)

The definition of clutch save so far this season might be that sequence from 13:24-13:06 of the second period, where Mason stopped three very dangerous chances in 18 seconds. Meanwhile, for the funny numbers crowd, how about the fact that Derek Dorsett came a toe save away from scoring a goal (shorthanded, no less!) at 15:15?

Once again, you may notice we have another case of deceptive numbers. On the one hand, Aaron Johnson looks great at E/S, until you consider that he was not actually on the ice for any goals for, and he was on the ice for the single Anaheim goal against. Wiz, also, was on ice for more E/S chances against (in no small part due to his heavy workload), but had a key assist on the Tyutin and Nash goals (though the Nash one obviously did not count for his E/S rating).

Ryan Johansen, on the other hand, continues to look like the real deal, and the combination of Johansen, Matt Calvert, and Antoine Vermette seemed to click into a potent offensive force while still doing a good job of managing responsible defensive play. 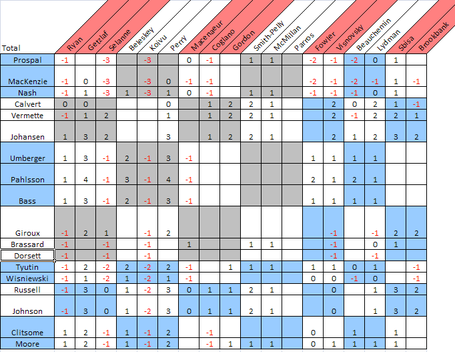