If you'd guess I was going to say "We got good looks on the PP but didn't convert" and "That SH goal really killed us", congratulations, you get a gold star! Another non-surprise is that Sammy Pahlsson sucked wind yet again, but I admit the line-shuffled Derek MacKenzie being a surprisingly good chance driver was a silver lining.

Honestly, Allen York saw a decent amount of Chicago scoring chances, and I think it's worth pointing out that aside from the empty net goal, every Chicago goal came from right down and dirty in the prime scoring chance areas, so full marks to them.

To the Jackets credit, they worked at even strength and with the PP. But the lack of finish, particularly from the second line, is killing this team. Umby, in particular, had some fantastic opportunities and just couldn't bury them, and that lack of success is very possibly going to be the epitath on Scott Arniel's tenure here in Columbus.

Despite the fact that Wiz and Tyutin were both in the red on scoring chances, Tyuts was not on ice for any goals against, while Wiz was only on ice for the Stalberg power play goal and the Frolik empty netter. Their negatives were much more about playing over 30 minutes last night - particularly at even strength, where Wiz essentially spent an entire period on the ice. I'm not a hockey coach, but I can see when someone is being overworked. Wiz and Tyutin may be game, but throwing them out for that kind of ice time is a really good way to get them worn down at the end of a game and at a far greater risk for injury. 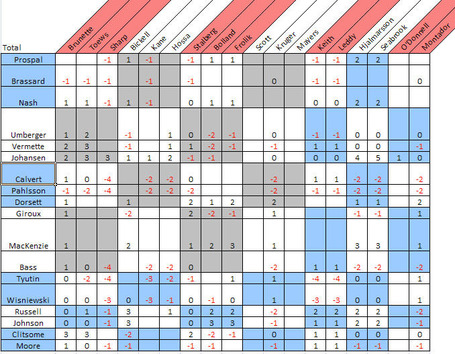 Ryan Johansen had another game where he generated scoring chances in spite of facing tough competition. Rick Nash also made a strong showing, despite some ugly matchups, and you can clearly see where D-Mac joined the top line and Brass dropped down.