Oh, boy! 43 shots! There have to have been a TON of good scoring chances for the Jackets in 43 shots!

But we held the Sabres to 26 shots - heck, we only allowed 6 shots in the entire second period. That means we probably did a good job of holding them down too, right?

Maybe....maybe it would be better if you sat down for a minute.

I will say one thing, looking at the numbers - if Scott Arniel was truly trying to focus on the guys who were getting opportunities when he shortened his bench, I have no idea why on EARTH Sammy Pahlsson got to play almost 15 minutes, and Ryan Johansen only played 9. Nor does Derek Dorsett getting over Max Mayorov.

Here's your killer, though, and what it really boils down to - out of those 43 shots, the Jackets only had 15 real quality scoring chances. Out of the Sabres 26 shots, they had 16. I don't know if that's entirely a question of poor defensive play or the boys in Union Blue getting trigger happy and swinging on any opportunity, but I can tell you that our shot placement tended to come from way outside of the prime scoring areas, with lots of attempts from the perimeter and blue line, and not nearly enough inside the circles or in the slot.

Oh - and if you  want insult to injury, consider that the Jackets generated 4 quality chances on the PP and went empty, while Buffalo generated three chances with their man advantage and converted two of them.


So, I think that Luke Adam kid is pretty good. Notice that he, Thomas Vanek, and Jason Pominville not only drove a good chunk of the Buffalo scoring, but  generated the majority of chances on a consistent basis, and therefore much of the pressure on Steve Mason, particularly against the "shut down line" of Pahlsson / Dorsett /  Mayorov - and it only got worse when Mayorov was benched and Cody Bass put in his place. 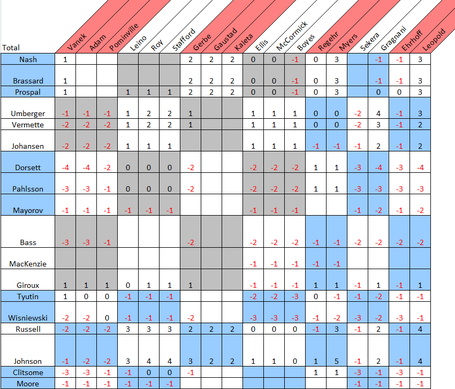 I will give Scott Arniel credit - he did his best to put the top line out against weaker opponents where possible, and for the most part they succeeded in creating scoring opportunities. It also seems like his use of the second line vs. Buffalo's second and fourth lines was working - but we simply were outmatched by their top line both shorthanded and at even strength, while Aaron Johnson's apparently rosy amount of scoring chances seem less like his own work, and more a benefit of being on ice when the top line was hammering away at guys like Nathan Gerbe and Paul Gaustad. Similarly, Wiz's poor numbers seem less about anything he did and more about the way he was spread out trying to defend against every unit  - though both he and Tyutin appeared to have problems with the Tyler Ellis / Cody McCormick / Brad Boyes combo (and I'll bet you good money most of those scoring chances came, again, with the Pahlsson line on the ice.) Also, consider the wretched state of Cody Bass vs. how much time he spent on the ice.

Is there a silver lining? Honestly, yes. I'd argue that we still saw good work from the top six, and I'd even suggest that Derek MacKenzie, while not great, was still potentially better than his ice time suggested. I'd even consider moving him up and reducing Pahlsson's minutes if this keeps up. I'd also say that, yes, John Moore appeared to struggle, but considering how badly his ice time was cut, I have to agree that he, too, perhaps was given an unfair shake.

Was Jhonas Enroth good? Yes, he certainly was. But in honesty, the Jackets made it a lot easier on him than we could have.