Boy, it's nice to do one of these where a win is involved.

In a game where the chances were kept relatively low for both teams, the biggest signs of progress for the Blue Jackets comes from A) Finally capitalizing, B) Dominating PP scoring chances, and C) owning play at even strength.

Despite the Red Wings skill and speed, the Jackets did a great job of denying them prime scoring opportunities, and it showed in the end results.

One of the biggest changes from Friday night is the way the Wings were unable to chain together a lot of prime scoring chances - the only exceptions being the sequence at the end of the Wings first PP that eventually ended in the Helm goal, and the pressure put on by the Drew Miller / Patrick Eaves/ Thomas Holmstrom line in the final minutes of the second period. By contrast, the Jackets did a much better job of generating pressure of their own, particularly in the first period. 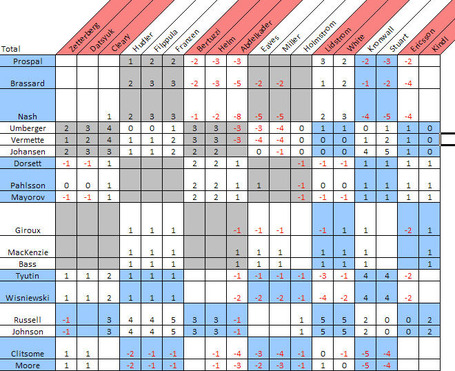 If there was any question about how Ryan Johansen is adjusting on the wing, this should bury it - he was able to generate at least a scoring chance in virtually every matchup.

It is a little surprising, though, how the Nash line struggled against Helm, Abdelkader, and Bertuzzi, and for the excitement of John Moore getting his first goal, it's also clear there's still work to do. He and Clitsome were playing with fire for a lot of the evening, and we were lucky that Steve Mason wasn't burned.